One of the things I enjoy most about my Hot Docs media pass is the freedom it affords me to change my filmgoing schedule at any time. If I start hearing bad buzz about an upcoming film on my to-see list, I can change course and see something else. If I hear great things about a doc, I can opt to pick up another screening. And, in these very wet, cold and rainy days of Hot Docs 2017, it means I can scrap my planned screenings at venues with outdoor lineups in favor of those where the lines form inside.

Such was the case today, and why I wound up at Strong Island (5/8) at the Lightbox. It was a film not even on my radar until I found out my festgoing pals were seeing it, so I decided to join them even though I knew little about what I was going to see. The doc is directed 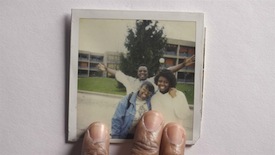 by Yance Ford, whose brother William was shot dead by an auto-shop worker in 1992. William was black, his killer white… and not convicted. Training her camera on her (amazing) mother, sister and himself, Ford tells two intertwined stories: one about his family and the aftermath of his brother’s death, the other about the crime that took his life and the injustice of his killer walking free. For the first hour or so, I was riveted. Using interviews, old photos and diary entries, Ford delivers a beautifully simple and incredibly rich portrait of his loving family, and the brother who had, as his mother explains, never been in trouble. It’s simple but powerful and moving storytelling. But about halfway through, there’s a revelation that kind of undoes some of what the audience has been led to believe, which (for me) felt wonky. It’s after that the film feels like it loses its way and some of its cohesiveness. The crime-centric portions of the doc didn’t resonate with me nearly as strongly as the close-knit family’s history and the exploration of how they dealt with such a devastating loss.

Since yesterday’s fatigue was still prevalent today, I opted for a two-doc day in order to rest up for the final few days of the fest. My second screening was Joshua: Teenager vs. Superpower (6/8), a profile of young Hong Kong activist Joshua Wong, whose initial 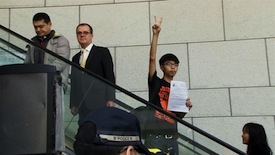 opposition – at age 14 – to the implementation of a National Education program (think: a rah-rah pro-government curriculum mandated by China) gradually led to tens of thousands of his fellow citizens joining him in public protests just a few years later. Director Joe Piscatella follows Wong over the course of his rise to infamy as the face of civil disobedience, from his early days trying to rein in his rowdy fellow teens at an organizing meeting, through his run-ins with police and government officials and eventual formation of a new official political party. To say that Wong is an impressive force would be an understatement. To be that focused, that determined and that courageous (remember: he was a kid taking on the entire country of China!) is remarkable, and Piscatella’s film shows Wong the leader while never letting us forget Wong the boy. As the credits rolled, I couldn’t shake the feeling that this doc is probably just the first chapter in what will could easily be a series of films chronicling Wong’s work to come.

As a plus, I ran into another festgoing pal while in line, so we had time to catch up and share in the misery/amusement of sitting several seats away from someone eating the LOUDEST and CRINKLIEST bag of candy on the planet throughout the screening. Good times.