There are only two full days of Hot Docs left, and between the films I saw before the fest and the ones I’ve taken in during the past week, I think I’m at around 42 or 43 documentaries screened so far. PHEW! I’m starting to really feel it, too, and – as much as I lurrrrrrrrrrrrrve the festival – counting down to Monday, when I can rest. On the upside, I bought my first-ever Lightbox concession snack today (a cookie) and it was not only very tasty but not as ridiculously expensive as I feared. Win-win! Speaking of food…

My first film of the day was Ramen Heads (6/8), a very popular selection, given the packed theater and the number of its screenings that have gone rush. 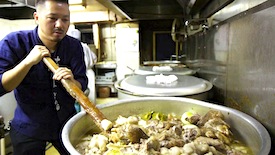 A must-see for foodies (note: a group of which I am not a member), the film is a celebration of ramen: how it’s made, the secrets to its flavors, and the renowned Japanese chefs whose talents are poured into every bowl. Its central subject is Osamu Tomita, who’s celebrating his 10th year in business dishing up perfectly crafted noodles in meticulously simmered broths, and who teams with two of his top-notch peers to create an exclusive, indulgent batch of ramen for some very lucky customers. As someone who’s never had proper ramen, the doc was nonetheless interesting, with Tomita serving as a savvy culinary tour guide, and all the food was shot beautifully – at the post-screening Q&A, the director revealed that each noodle house was so small that he had to direct his cinematographer (who was the only person who could fit in the kitchens with his camera) from outside. But I think watching the preparation of broth, and the various ingredients dumped into each massive pot, is sort of like watching sausage being made: you don’t always really want to know what’s in it. You know, like a whole pig’s head… eyes and all. I think I’ll stick with the vegetarian options. 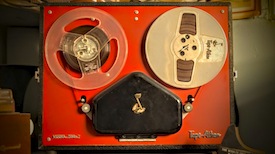 After a quick snack break with a festgoing pal, it was off to my second and last screening of the day. (Still trying to recharge before two three-film days this weekend). It started with a super-delightful short called Silently Steal Away (7/8). Directed by Andrew Swant, the film delves into the mystery behind The Jack Raymond Show, a cult-hit but little-known radio program on a tiny radio station in Chippewa Falls, Wisconsin. Broadcast every night at 11 for decades, the show’s velvety-voiced host remains an enigma to all his listeners after all this time. Who is he? What does he look like? Through interviews with some of the show’s biggest (and probably youngest) fans, including Bon Iver’s Justin Vernon, Swant and his team set out to find out, and the result is a heartwarming love letter to a bygone era, and to a voice that has meant so much to so many for so long.

Unfortunately, its companion film, The Quiet Zone (4/8), wasn’t nearly as compelling. The film looks at the electro-sensitive residents living in the National Radio Quiet Zone – an area in the mountains of West Virginia that’s home to an enormous radio telescope. The 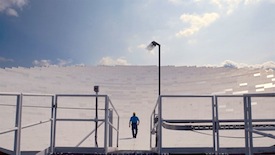 “quiet zone” is a protected area of land where cell phones, TVs, computers and all manner of technology are forbidden in order to eliminate electronic interference that might compromise the telescope’s ability to function properly (one scientist says it’s powerful enough to capture the energy of a single snowflake hitting the ground!), and these folks have moved there as a way of seeking refuge from the electric energy that plagues them elsewhere. But the film is all over the map, offering only small glimpses of the locals and only hinting at what brought each of them to the town. To be fair, given the residents’ ailments, the filmmakers were somewhat limited to what, where and whom they could shoot, but that leaves the audience with subjects who aren’t particularly engaging or sympathetic. We don’t really get to know any of them, and it would have been great to learn about how they live.  As well, it felt like a lot of obvious information was missing, as evidenced at the Q&A. Almost every question asked could very easily have (and perhaps should have) been answered in the film, but – for whatever reason – wasn’t.