Today’s cold, rainy, windy weather was ideal for festgoing, so I put on my hat, scarf and mittens (yep, on April 30th!) and headed out early for a day full of films at the Lightbox. Anticipating that many other movie lovers would opt for the same activity today, I arrived about 50 minutes before my first screening… only to find myself first in line. What the what? I’m not sure whether other venues were likewise empty – given that it was a Sunday, and daytime screenings are free for students and seniors, I expected much bigger crowds – but I was very easily able to snag my fave seat at all three of my films today. 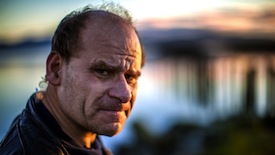 First up was Hope (4/8), director Alan Zweig’s follow-up to 2015’s Hurt, picking up right where that film left off, and catching up with Steve Fonyo as he battles his addictions and struggles to get his life back on the right path. For anyone out of the loop, Fonyo shot to fame in a post-Terry Fox Canada as the “other guy” with a prosthetic leg, who ran across Canada in 1985 at age 18. Unfortunately, his life veered off course as an adult, and Fonyo – now in his 50s – is barely recognizable as the former face of cancer-research fundraising. Down on his luck, he reluctantly enters an eight-week rehab program, and the film tracks his progress. Sort of. While I’ve always been a fan of Zweig’s work, this one felt lacking in terms of depth and structure, perhaps due to an increasing lack of objectivity – Zweig’s personal stake in Fonyo’s recovery seems to have overshadowed his job as a documentarian. There are assorted interviews with a combative Fonyo, who wants help but then doesn’t take the help he’s given, and his long-suffering girlfriend… but the project feels more like an overlong postscript to Hurt than an effective standalone doc. There are repeated drone shots of the gorgeous B.C. landscape, but after a while they started to feel like needless filler to stretch the film to feature length. As it is, it runs a brisk 76 minutes, and I would have liked a little more meat on its narrative bones. That said, and as abrasive a personality as he can be, it’s hard not to root for Fonyo, as was evidenced by the warm reception he received when he turned up for the post-film Q&A. 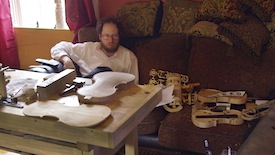 After quickly darting out for lunch, I got in line for my second film of the day, which may turn out to be my favorite of the entire festival. I LOVED LOVED LOVED Strad Style (8/8), and have not been able to stop recommending it to anyone who will listen. I had zero expectations going in, but can now say: whether you’re an artist, a musician, a dreamer, an eccentric or just a lover of amazing documentaries, put it on your to-see list immediately.

Directed by Stefan Avalos, the film revolves around a reclusive thirtysomething artist/musician/eccentric/dreamer named Danny Houck, who lives in rural Ohio strikes up an across-the-pond Facebook friendship with a Romanian violin virtuoso named Razvan Stoica… and subsequently tells Stoica he can him build a replica of “Il Cannone,” the famous Guarneri del Gesu violin, to play at an upcoming concert. Cue: spit-takes from the audience, because Houck has no real training, and is crafting his replica fueled on determination and largely based on photos. What follows is an intimate look at Houck’s process and persona, as his creation very slowly and with great difficulty takes shape, while Stoica (thousands of miles away) eagerly awaits its completion. Will Houck finish the project on time? Will it look like Il Cannone? Most importantly – especially for Stoica – will it sound like Il Cannone? Will it even sound good??? Watching the seasons change and Houck painstakingly toiling away for months on this one violin, I was literally on the edge of my seat, wondering what the outcome would be. And to say any more would be to spoil the magic of experiencing it all unfold onscreen.

Funny and heartfelt and beautifully told, Strad Style is a surprisingly moving testament to believing in yourself and chasing your dreams no matter what. (I was totally in tears by the end!) It’s my first full-pie film of this year’s festival, and has set a high bar for the rest of the docs I’ll be seeing this week. 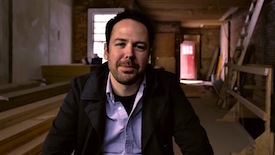 Thankfully, my third screening of the day, New Chefs on the Block (7/8), kept the good times rolling, cinematically. Not surprisingly, given that it’s a documentary about chefs, the theater was packed. (I’m not sure why, but audiences always come out for chef flicks at Hot Docs.) The doc follows two Washington, D.C.-area chefs – Frank Linn Jr. and Aaron Silverman – as they each set out to launch their first restaurants. Linn is hoping to turn his mobile-wood-oven-pizza business into a proper dine-in establishment in Kensington, Maryland, while Silverman is hoping to strike gold with upscale cuisine in the heart of D.C. For anyone (like me) who’s ever watched an episode of Top Chef, you know opening a restaurant is no easy task – in fact, the film’s onscreen stats reveal that only 30% of these culinary ventures ever succeed… and many would-be restaurateurs never move beyond the construction phase. Following a few years in the lives of both chefs and featuring commentary from renowned chefs (including a beyond-lovable Michel Richard), the doc reveals the hardships and triumphs of the process, from wayward employees to the value of a positive review in the Washington Post.

Director Dustin Harrison-Atlas lucks out with his two subjects, both of whom are terrifically engaging, likeable, genuinely nice guys – not necessarily a common trait when you think of successful chefs – and each story is as compelling as the other. I was very glad I knew very little about either of them before the film started, and that I didn’t know the outcome going in (i.e., would either restaurant succeed?), because that made watching their respective journeys that much more enjoyable.