What a truly miserable day, weather-wise. Non-stop pouring rain, chilly temperatures and, from what I could tell, many festgoers opted to stay home (and dry) instead of venturing out. And, now that I’m back home (and dry), I can’t say I blame them. 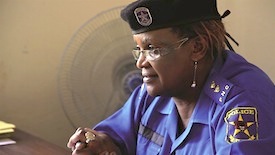 My first film of the day – Mama Colonel (5/8) – was a tough one… largely because its titular heroine – Congolese police Colonel Honorine, whose department investigates crimes against women and children – spends the duration of the film dealing with one harrowing account of abuse after another. Within the first five minutes of the doc, a desperate mother learns Mama Colonel (as she’s known) is being transferred to another city, and asks who will protect her young daughter (who looks no more than three years old at most) from rape, since the terrified tot has already been gang raped by a group of men who pulled her out of her own bedroom window. The atrocities against their society’s smallest victims, and the deeply rooted patriarchal belief that it’s all okay, make Colonel Honorine’s work nearly impossible, but she soldiers on despite resistance from locals and apathy from the police force itself. And while the story is an important one to tell, the film’s lack of balance and respite (it is ALL suffering, ALL the time until the film’s final few minutes) made it difficult to sit through. There were no interviews with Colonel Honorine, and – to me – it would have been interesting to hear how and why she manages to do this hugely heartbreaking work amid such challenges. 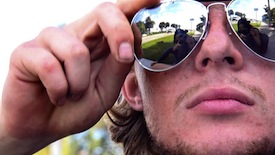 Next up was a comparatively lighter film that unfolds more like a cinematic poem than a standard documentary. Directed by Nanfu Wang (Hooligan Sparrow), I Am Another You (6/8) revolves around a twentysomething drifter named Dylan, whom Wang meets by chance while staying at a hostel during a trip to Florida. Dylan, with his boy-band good looks, warm smile and inherent charm explains that he’s traveled across the U.S., relying on the kindness of strangers or the occasional odd job for money, food and shelter. Intrigued by his lifestyle, Wang trains her camera on him and decides to document a portion of his journey, joining him as he sleeps in parks, eats from trash cans and starts to make his way north. Shot on-again/off-again over a few years, the film gradually reveals that there’s more to Dylan’s life story than simply the fact that he’s in search of true freedom, and Wang eventually connects with the family he left behind in Utah years earlier. Filled with wonderful “small” moments, I Am Another You is almost hypnotic as it unfolds, and the fact that Wang shot it with her first camera, on the spur of the moment, makes the resulting film that much more impressive. It’s a lovely exploration of what it means to truly be yourself, buoyed by a truly engaging and intriguing central subject who’s not afraid to live authentically no matter what that means.

Much to my chagrin, my final film was at the Bader. In the pouring rain. And the experience in line was not a pleasant one. For starters, all venue staff and volunteers stayed INside, while all ticketholders were kept OUTside – did I mention it was POURING? ‘cause it was – until about 15 minutes before showtime. There was a small tent set up near the front of the line, so those us who arrived really early started the line under it, serpentining ourselves in it (think: a huge, single-file letter “S”) in order to fit as many people as possible under it. After we’d all been in there, happily chatting, for nearly 20 minutes, a fest staffer (finally) came outside and barked at us that we needed to create a single-file line. Which is what we HAD done. We tried to explain the “S” formation and that we were in single file, but she wasn’t listening to us and kept saying, “No, it isn’t…”, then threatened to move the ticketholders sign past us, so that many of us would be forced out of the tent. Honestly, in all my years of festgoing, I’ve never encountered a theater rep who treated paying patrons like children the way this one did, and those of us line weren’t impressed. So, reluctantly, we had to move several of our linemates out into the rain… where they and everyone else had to stand, getting soaking wet, for another 20 minutes. We didn’t see the theater rep again after her tantrum, nor did we see any other staff or volunteers. People arriving at the line had questions… which we, their fellow ticketholders, answered in the absence of anyone official. It was all very frustrating. 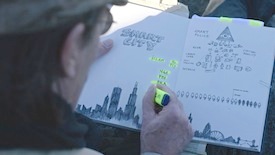 That whole experience put a damper (pun intended!) on the end of my day, and by the time I walked out of Pre-Crime (2/8), I was ready to go home. As everyone knows, I love documentaries about the internet and technology, so this was on my absolute-must-see list from the moment the fest schedule was released. Imagine my disappointment when it turned out to be boring, repetitive and waaaay over-stylized (nearly every shot was buried in what the filmmakers clearly thought were clever animated graphics or hugely distracting visual treatments). The film purports to be about the new wave of predictive technology available to police forces and governments, allowing them to use complex algorithms to predict who among us might be prone to committing criminal acts. Let me save you 85 minutes and tell you the lone fact that the film’s talking heads repeat over and over and over again is essentially: basing “pre-crime” arrests on computer data creates a flawed system because data can be flawed. THAT’S IT. That’s the big revelation, which is driven home by each expert the filmmakers interview and each new type of technology they introduce… except that even the experts are seeming unknowns and the technology is presented in a convoluted way. The two examples of pre-crime tech gone “wrong” that the doc explores – one guy in Chicago, and one guy in the UK – aren’t super-compelling or convincing, either. One openly admits to criminal activity in the past, the other sort of alludes to the fact that some of his friends might be criminals… so they inadvertently wind up shooting some holes in the film’s basic premise. There are also obvious reenactments that aren’t labeled as such, and I’m not sure everyone in the audience realized what they were seeing onscreen wasn’t happening for real, live on camera. Plus, there were repeated needless interstitials featuring a guy (an actor?) sitting on rocks on a beach, sketching in a notebook, contemplating the nature of technology (in voiceover) and posiing random questions aloud. ?????

All in all, the longer I sat in my seat, the more I found myself disliking this film, so I opted to cut my losses and leave an hour into it before its rating slid to zero slices.