I haven’t had so much fun since Bette tortured Joan Crawford in Whatever Happened to Baby Jane!
By Jenniferon March 31, 2009
0 Comments
Our Rating 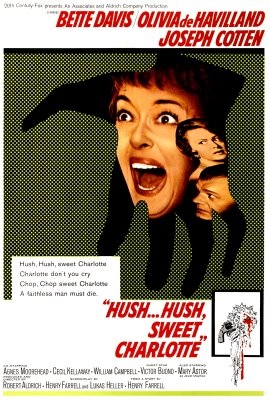 Given the choice between watching young Bette Davis out on the town or older Bette Davis cooped up in a house, I’ll always take the latter. In fact, I don’t think there has ever been a better crazy recluse than Bette, and Hush…Hush, Sweet Charlotte is a monument to her skills.

As the film begins, Charlotte’s lover, John (Bruce Dern), tells her father (Victor Buono from What Ever Happened to Baby Jane?) of their plans to elope. Weirdly, the guy is already married, but no one seems to think that’s too much of a problem. Her dad’s just upset because Charlotte is his only heir, and he has no intention of sharing his home, his fortune, or his daughter with John.

On the evening of a fancy soiree, Charlotte is supposed to meet John out in the gazebo. He’s just sitting there waiting when someone chops off his hand! It looks like old bone-in-ham and doesn’t bleed! And then they chop off his head! And after that, Charlotte comes in the house all spattered in blood!

It’s all downhill from there, and this fateful evening defines the rest of Charlotte’s life. Forever more, she’ll be tormented by the memory of John’s murder, and taunted by children singing, “Chop chop sweet Charlotte, chop off his hand and head, chop chop sweet Charlotte, chop chop til he’s dead.” She becomes a Boo Radley figure in her town, and John Megna (Dill from To Kill a Mockingbird) even plays one of the children who sneaks into her house for a look.

When we finally see her face, many years have passed. By now Charlotte is Bette Davis, and she’s a formidable middle-aged woman. She awakes one morning to find developers arriving with heavy equipment, but quickly pulls out a shotgun and prepares to defend her property. Unfortunately, the county is about to build a road right through her her land, and she’s been receiving notices for months. When one of the men (George Kennedy) tries to reason with her, she shoves a huge potted plant off the balcony at him. Clearly this is not a woman anyone wants to tangle with.

Left with only a week to clear out of her house, Charlotte calls in her cousin Miriam (Olivia de Havilland) from the city. She’s told everyone that Miriam will be able to save her property, but Miriam gets all doe-eyed and says that she just came to be with Charlotte during this difficult time. This infuriates Charlotte, who retorts, “What do you think I asked you here for? COMPANY?” Heh. Heh.

Strange things start happening as the days go by, and there is definitely some funny business going on. Velma, Charlotte’s loyal maid, starts to put the pieces together, but can she stop this evil plot from unfolding? Velma is delightfully played by the spirited Agnes Moorehead a.k.a. the most beautiful woman EVER. When I was little, I couldn’t wait to grow up, just so I could dye my hair red and wear make-up like Agnes as Endora on Bewitched. Velma isn’t so glamorous in her dumpy house dress and scroungy hair, but she’s still quite entertaining. Funnily, her stringy hairdo, with its random bobby pins and long strands, would be much harder to achieve than a tidier ‘do.

I can’t tell you much more without wrecking the story, but as Miriam, Olivia de Havilland is a far cry from mousey Melanie in Gone With the Wind (keep an eye out for the scene in the car where she slaps Charlotte repeatedly in the face). Joseph Cotten from Beyond the Forest plays Dr. Drew Bayliss, Miriam’s former beau, and the old biddies from The Waltons (Ellen Corby and Helen Kleeb) even show up as extras!

Filmed in Baton Rouge, Hush…Hush, Sweet Charlotte features beautiful scenery reminiscent of The Beguiled. Shoot, with all that gorgeous moss hanging from the trees, sometimes I think all movies should be shot in Baton Rouge. Though the movie is full of amusing characters, it shapes up to be quite a thriller, complete with plenty of plot twists, and an exceedingly satisfying surprise ending. I haven’t had so much fun since Bette tortured Joan Crawford in What Ever Happened to Baby Jane! 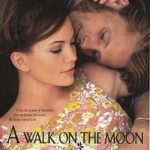 PreviousA Walk on the MoonNextAngels in America 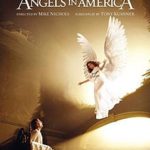