If a clown hiding in a gutter said hi, you would totally stop to talk to him, wouldn’t you? WOULDN’T YOU??!! (Maniacal cackle) 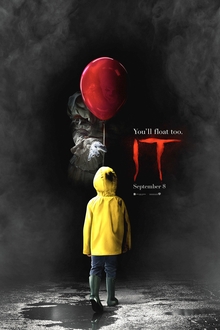 Now, I’d managed to avoid Stephen King’s IT my entire adult life. I remember the hefty 1,000+ page tome being passed around when it was published, and I remember when it was made into a 1990 mini-series starring Tim Curry as Pennywise. But the idea of a clown horror movie? I was all, “No no no no….” It’s taken over 20 years for Hollywood to take another stab (so to speak) at IT,  but now that clowns have been fully accepted into pop culture as the stuff of nightmares (maybe King is partially to blame?), the time seems right for a new adaptation.

IT opens with the ridiculous and bizarre premise that a little boy is snatched by an evil clown (Bill Skarsgård) lurking in a curbside gutter. Now, none of this makes any sense. Why the heck is there a clown in the sewer? Why is this gutter big enough for a child to be snatched and pulled in? But heck, I guess that is just me trying to rationalize the horrible image of Pennywise’s white face peering out of murky blackness. I was already giggling and squirming.

Apparently in this small town in Maine (of course) there have always been a way higher than average number of missing kids–I’m talking a LOT–with little Georgie just being the latest. Georgie’s sweet older brother Bill (Jaeden Lieberher) and his loser buddies don’t really talk about it, but when they all start seeing visions of their worst fears, they become very very uneasy. When no adult can see that your bathroom is soaked in blood after your own hair has tried to pull you into the drain, that has got to be a little bit concerning.

Without knowing the source material, I felt that the first half hour or so of the film was rushed. There were too many kids in the pack (seven!) being introduced (not to mention token bullies!), mainly by their trope in King’s default pantheon (see Stand By Me for another example): The sensitive kid, the smartass, the fat kid, the token black kid, etc. But I have to say, the kids grew on me, and I don’t think it was an accident that they reminded me of the kids in Netflix’s hit show Stranger Things. After all, Finn Wolfhard is in both of them. The kids are funny and real (if at least two too many). I particularly liked Jack Dylan Grazer as Eddie, the hypochondriac who resembles a mini-me Emma Watson, and whose fears are represented by a leper (ha!). Also Sophia Lillis as Beverly, aka The Girl (of course there’s just one!), is a natural, and her resemblance to a young Molly Ringwald is totally acknowledged (after all, the story takes place in the late 80s).

The kids make the movie. You’ll get a kick out of hanging out with this pack of self-proclaimed losers. The premise doesn’t make a lot of sense if you pause to think about it at all, and the credits hint at more to come that may explain things. But it’s a lot of fun… and I’m NOT talking about the clown.

The extras on the Blu-ray release are as charming as the movie is creepy. Unsurprisingly, the kids got really close on the movie set, and it showed on film with their great chemistry. For them, it was basically and all-summer camp (with clowns!). Fun to find out that they were filming for several weeks before getting to meet the clown on camera, so that their reaction shots were as raw as could be. Also fun to see what IT clown Bill Skarsgård looks like in real life (benign, except for the lazy eye which he used to great effect on screen). Very funny to find out that he auditioned using one of his favorite facial tics, the drooping slobbery lower lip (the kids said he drooled a lot), and was in full makeup. And of course there is Stephen King, talking about the writing of the book when he was quite young and had young kids at home. That man is messed up.