If you can’t recall exactly what happened at the end of Maze Runner: The Scorch Trials, the second (and hugely clunky) installment in this dystopian trilogy, you’re probably not alone. But you’d best refresh your memory before checking out this final chapter, because it literally hits the ground running and expects you to know what’s going on. 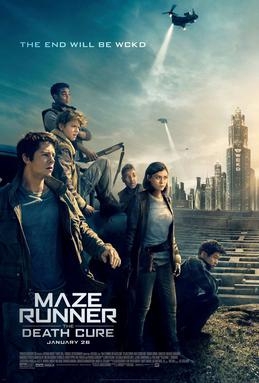 For the forgetful: when last we saw Thomas (Dylan O’Brien) and his rag-tag band of resistance fighters, they were betrayed by Teresa (Kaya Scodelario) and being ambushed at the Right Arm’s base camp by evil corporation WCKD – led by trigger-happy Janson (Aiden Gillen) and sinisterly maternal Ava (Patricia Clarkson). Carnage ensued, Minho (Ki Hong Lee) was captured and Thomas vowed that he would do whatever necessary to get him back. Cut to black.

When Death Cure begins, an indeterminate amount of time has passed and we’re dropped right into the middle of that action-packed rescue operation, as Thomas, Brenda (Rosa Salazar), Jorge (Giancarlo Esposito, the best thing in this movie) and Newt (Thomas Sangster) lead an extraction team to yank Minho off a transport train through the middle of nowhere. When that fails, Thomas hatches a new covert mission: find a way to the mythical Last City – and WCKD’s HQ, where they believe Minho’s being held – and try again.

That, in turn, gives way to the next two hours or so of action in this overly long, repetitive and not especially interesting sequel, which introduces a few promising storylines but ultimately lets them fizzle out before the whole thing lurches to a big, fat, explosive, “Wait. THAT’S IT?????” conclusion, immediately rendering this film and its two predecessors a drawn-out exercise in frustration for the average filmgoer.

As Thomas and company embark on what’s considered by his peers to be a suicide mission, we’re treated to an array of attacks by “cranks” (recall: former humans who have been rendered zombie-like, savage ghouls by the plague that wiped out much of humanity), the reappearance of an old frenemy (Will Poulter) and the completely inexplicable presence of the usually brilliant Walton Goggins, who’s stuck under a pile of grisly prosthetic makeup to play… I’m not really sure what. Is he supposed to be a villain? A hero? A pointless side character introduced for a vague reason and whose sole purpose seems to be to light a proverbial, then literal, fuse?

The performances by the young actors are all fine, occasionally infused with slightly over-the-top gravitas, but it all just feels like more of the same from the previous films. There hasn’t been much evolution, and the deep bonds that are meant to exist between the characters don’t resonate or feel legit. The exceptions are Scodelario, who does what she can with a somewhat thankless role, and Esposito, who remains the most entertaining and watchable actor in this series of films.

Apparently, the James Dasher novel that provides the source material for Death Cure has a very different ending than the film does, which is a bit of a relief (because, as mentioned, the movie’s conclusion is l-a-m-e). But, unfortunately, the rest of the movie isn’t really strong or memorable enough to make up for in impact what its lacklustre ending lacks. Wait for DVD.