Key and Peele are as dry and self-deprecating as their situation is over the top, resulting in an oddly perfect recipe for comedy. 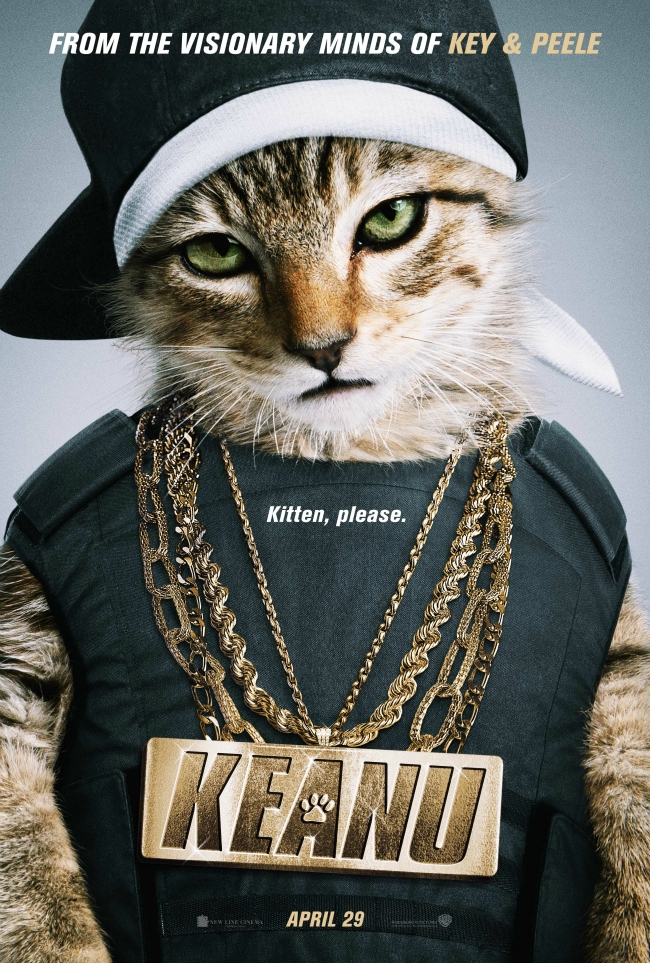 In the realm of movie plots, Keanu is definitely one of your more random options. The film centers around a ridiculously adorable kitten who originally belonged to a Los Angeles drug lord. During an incident known as the Diaz Church Massacre, Keanu flees, ultimately winding up on the doorstep of Rell Williams (Jordan Peele). Having just been dumped by his girlfriend, Rell is in an especially vulnerable state. He rescues Keanu and becomes a doting cat mom, talking to the kitten as though he’s human and generally catering to his fuzzy baby’s every whim. Sadly, Rell’s newfound sense of peace will not last long.

Rell’s cousin Clarence (Keegan-Michael Key) has the weekend to himself while his wife and daughter visit a friend’s cabin, so he and Rell take in a “Liam Neesons” movie and spend some quality guy time together. It should be another step forward in helping Rell recover from his break-up, but when they return to Rell’s place at the end of the evening, the doors are kicked open, the living room is trashed, and (worst of all) Keanu is missing. Rell heads across the street to his dealer Hulka’s house and quickly realizes that his neighbor was the intended target.

After pressing Hulka (Will Forte) for clues, Clarence and Rell head to the HPV Club, a sleazy strip joint located smack in the middle of gang territory. Needless to say, the rough neighborhood makes Clarence and Rell look as suburban as Mr. Rogers, but they work their way in to see the local drug kingpin, Cheddar (Method Man), by pretending to be the legendary Dresden brothers. Well, they don’t so much pretend as they go along with a case of mistaken identity, but the point is, THEY FIND KEANU! Unsurprisingly, Cheddar has also become attached to Keanu and has no intention of giving him up. He’ll consider it, though, if Clarence and Rell will mentor some of his people and go out with them on a drug run.

Rell remains determined and agrees to Cheddar’s terms, placing himself and his cousin in the absurd and dangerous position of leading a group of thugs through their type of drug deal. You know, the kind they’ve totally never done. Miraculously, they manage to fake their way through almost everything as Rell strikes up a tenuous friendship with a lady badass named Hi-C (Tiffany Haddish) and Clarence wins over the guys by explaining how George Michael is basically a thug god. They come close to pulling the whole thing off, but moments before reclaiming Keanu, everything falls apart in an epic (and hilarious) way.

Despite it’s slightly ridiculous premise, Keanu works on just about every level. Key and Peele are as dry and self-deprecating as their situation is over the top, resulting in an oddly perfect recipe for comedy. Throw in A LOT of George Michael (seriously, you won’t be disappointed) and a cat so cute you just want to nibble his ears and you’re in for 100 minutes of dopey, unapologetic fun.

Both the Blu-Ray and DVD versions of Keanu include the featurette “Keanu: My First Movie”, deleted scenes, and a gag reel.