Florence Foster Jenkins was a woman who was an uneven, not particularly talented singer, but people loved her because her earnestness.

Florence Foster Jenkins, the movie, is also uneven, despite its talent and earnestness, and is simply not very good. 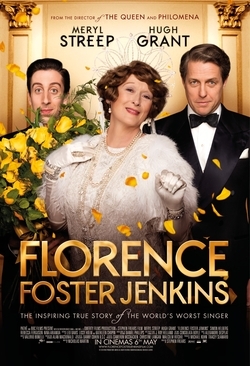 The funny and wonderful thing about Meryl Streep is that anyone who has seen Mamma Mia knows very well that the woman has singing chops. So, when she gargles and trills and screeches through sprawling operatic notes as the titular character, we can’t help but giggle. Streep also has some killer comic timing, so she is as good a fit as anyone to play this real-life character, a woman who made it big in pop culture in the 1940s, as well as played packed Carnegie Hall, despite the fact that she was really kind of a terrible singer.

Florence, a high society lady that we learn very quickly is gravely ill, is lovingly supported by her husband St. Clair Bayfield (Hugh Grant). St. Clair and Florence have an odd, old-fashioned relationship. He leaves the apartment at night to stay with his mistress, but not before tucking in Florence and lulling her to contented sleep. To encourage her singing hobby, he shells out money for the best coach in New York City, and auditions talented young men to accompany her on the piano. St. Clair knows that the piano player has to have a… special understanding of Florence’s talents, so he settles on one Cosme McMoon (Simon Helberg), who face betrays his shattered future as a professional when he first hears Florence sing.

Now, this is all good. This is truly a fascinating story, even more so because it is true. The real Florence did record music that was heard on the radio, and she did perform at Carnegie Hall. Florence Foster Jenkins portrays this woman with a dream, who is so protected and sheltered by those that love her, that you willfully hope (like St Clair and eventually Cosme) that no one will be cruel. So, yes, it is a great story.

But Florence Foster Jenkins is as uneven as her voice. The goofy, rubber-faced Simon Helberg seems like he should be in a Wes Anderson movie. The tone tries to be slapstick, but is too muted. It just never really takes off. Meryl Streep hitting off-key notes is only funny so many times, and you start to realize that this film needs something more than that.

Meryl will most likely get another Oscar nomination out of this (just for showing up and playing a title character), but for her, this material is like a school play that is not fleshed out. There is a better movie in here, and that is the one she should be starring in.