Land of the Dead

Let’s just say, I don’t think I ever need to see someone’s head-skin peeled back over their skull ever again.
By Lindaon April 21, 2013
0 Comments
Our Rating 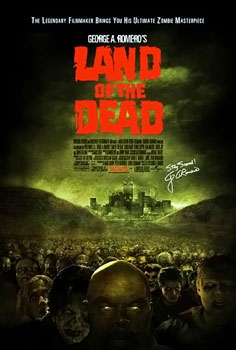 George Romero, the father of zombie movies, is back to show everyone how it is done. And hooo-boy! If you are into flesh ripping, gnawing, pulling, tearing, and shredding, this movie is for you. There are many truly, truly gross and disgusting moments in this film which will make even those with steel stomach squeal and giggle and throw up a little in their mouths. Let’s just say, I don’t think I ever need to see someone’s head-skin peeled back over their skull ever again. Ewww. EWWWW.

This is the perfect time for Romero to jump back into the fray since unironic zombie horror-movies are gracing the screen again (like 28 Days Later, and the remake of Romero’s own Dawn of the Dead). Land of the Dead takes place sometime after zombies first rose from the dead, and now the living are self-quarantined in a sort of walled city that seems more than a little like the Warsaw ghetto. Their captor is their fear of the zombies that now seem to rule the earth. One bite from those bad boys, and you yourself will “turn” in an hour.

But until now, the zombies are not exactly the brightest bulbs in the pack. They get picked off quite easily (you have to blow their heads off basically), and still lurch along with their stiff-kneed, crooked neck hobble. But now one big guy, a zombie gas-station attendant with Big Daddy embroidered on his coveralls, seems to be slowly putting 1 + 1 together (2 and 2 is probably still too complicated). The zombies are learning to fight back—and more importantly use weapons—and they’re pissed.

Call on the scrappy thugs to save the day, led by Riley (bland Simon Baker) and his pal/sometimes nemesis Cholo (scenery-chewing John Leguizamo). Dennis Hopper shows up in a flashy suit as a power-wielding fellow in the city’s ivory tower (you know he will get his due), and Asia Argento plays the token Hot Babe who can kick ass. Minor characters get picked off one by one (or should I say piece by tasty piece?), zombies kill and get killed (again) in creative bloody ways, and all of mankind is—rather abruptly—saved at the end.

Land of the Dead is exactly what you’d expect from a zombie movie, and if anything, is a notch above the typical. The extras on the DVD illustrate that these folks sure know their stuff, from Romero’s visions of grossness, to the makeup artists’ brilliant and gleeful creativity when it comes to finding ways to rip people apart in the most graphic way possible. The funniest extra on the DVD is a bit where Simon Pegg and Edgar Wright, creators of the British “rom-zom-com” Shaun of the Dead are invited to the set to play zombies in their idol’s movie. They practically squeal like schoolgirls and stammer in awe when they meet Romero. Their wide-eyed joy of the genre is infectious, and makes you realize that all the filmmakers are having a blast. They may not have an Oscar on their horizon, but I’d be pressed to argue that these folks don’t have the funnest movie-making job in the world.