This very dark mystery/drama plays like Scandinavian noir mixed in with a little bit of X-Files.
By Lindaon April 21, 2015
0 Comments
Our Rating 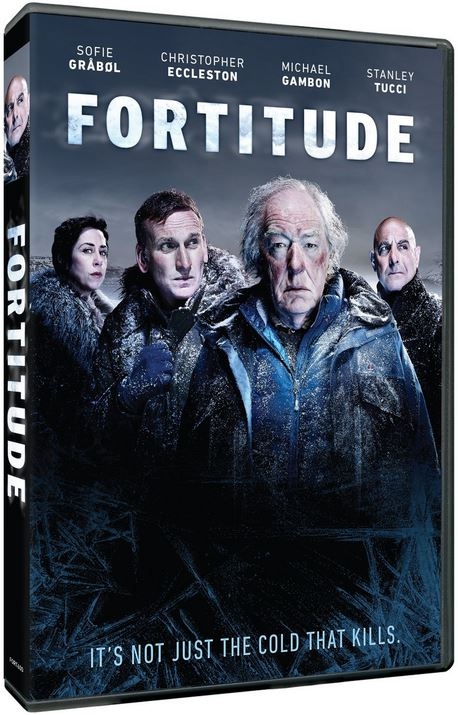 With the dim Arctic light, the ever-present snow, and the need to carry a gun outside at all times (polar bears!), the remote island-settlement of Fortitude is a place that takes, well, fortitude to live in. But the climate isn’t the only thing chilly in Fortitude. Just when the development-hungry governor (Sofie Gråbøl) announces plans for a new “glacier hotel” to draw tourists to one of the safest towns on earth, well, someone gets eaten by a polar bear. And then someone gets murdered. Very very murdered. Ooops.

And that is just the first episode in this very dark mystery/drama that plays like Scandinavian noir mixed in with a little bit of X-Files. One of the opening scenes has a couple local guys stumbling upon an ancient mammoth carcass that has emerged from the ice. They see it as a cash cow (no pun intended): shoot, either sell it to the scientists at the local research station, right? or at least get money for the ivory tusks. But it becomes clear that dragging a melted carcass of mysterious origin and hiding it in a shed is not a good idea. Does the discovery of the mammoth coincide somehow with the guy getting eaten by the bear? Or with one of the locals getting flayed in his own home?

Fortitude takes its own time unfolding the mystery, and has a bevy of characters in the weird little town to follow. There is a dying old hermit (Michael Gambon), a beautiful waitress with a mysterious past (Verónica Echegui), a veteran of Afghanistan (Nicholas Pinnock) cheating on his wife, a visiting mainlander detective (Stanley Tucci), a couple of Fargo-esque female deputies, some earnest scientists, a crazy Russian miner, and more.

But the real standout of the cast is Richard Dormer as Sheriff Dan Andersen. Dan Andersen almost single-handedly has to handle the town coming apart with craziness and gruesome violence, while anyone can see that (mammoth-vibes or not) he is more than a little cray-cray himself. You never really know if Sheriff Dan will lash out with violence himself, or turn on his heel and be a genuinely nice guy (who you just KNOW has secrets of his own). Dormer, I have to say, is pretty fantastic.

This is not a cozy show by any means. Some might argue that it takes a bit of fortitude to sit through all 10+ hours of episodes (apparently another season is promised) since it is rather slow-going and has a huge cast of mostly unlikeable characters to track. However, I loved the gorgeous, stark Arctic setting (a fictionalized version of Svalbard, filmed in Iceland), and the idea that a community can truly be so frighteningly isolated in a time where communication and media flows so easily. Fortitude is a slow burn (or slow freeze?) that will appeal to mystery and thriller fans with patience.