Shaun of the Dead

If you love zombies and British humor, you’ll likely LOVE Shaun of the Dead. Heck, even if you only think zombies are mildly neat and feel British comedy is an acquired taste, you’ll probably still get a big kick out of this monster-movie spoof with a decidedly unique flair.
By Vickieon September 23, 2013
0 Comments
Our Rating 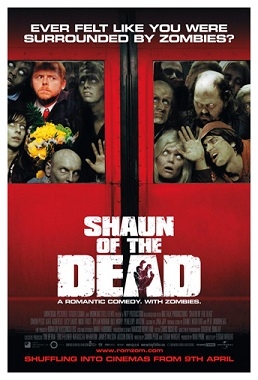 Set in North London, the movie – which the press materials refer to as a “rom zom com” (romantic zombie comedy) – centers on hapless twentysomething Shaun (Simon Pegg, who co-wrote the film’s screenplay with director Edgar Wright). Shaun’s life isn’t exactly where he’d like it to be. He’s in a dead-end (ha ha! get it? DEAD-end!) job at an electronics store staffed by teenagers, his girlfriend Liz (Kate Ashfield) breaks up with him for his slacker tendencies, and his only solace are the pints down at his favorite pub, the Winchester, alongside his even-more-hopeless best friend, Ed (Nick Frost).

But, as life would have it, things go from bad to worse when the city is gradually taken over by flesh-eating zombies, who slowly plod through the residential streets gasping and moaning and looking generally not well.

So, as humanity is “converted” to a population of the undead one body at a time, Shaun and Ed set out to rescue Liz, save Shaun’s mum (Penelope Wilton) and escape the decaying masses. Complicating matters are Shaun’s chilly stepfather (Bill Nighy, Love Actually) and Liz’s two best friends (Dylan Moran, Lucy Davis), all of whom add much-unappreciated conflict to the already stressful proceedings.

What’s great about Shaun of the Dead is its exceedingly dry humor. Shaun and company are often more irritated by the zombie situation than they are terrified. The film pokes fun at countless zombie flicks that came before it, but does so in a way that’s irresistibly cheeky and smart, rather than childish and over-the-top. Imagine Hugh Grant meets The Mummy and you might have some idea of what this is like.

Simon Pegg makes for a perfectly harried lead, who uses this invasion of walking corpses as a way of proving himself (and his worth) to his family and friends. I mean, what better way of showing you’re going places in life than to save everyone you know from certain death? Nick Frost is a lovable lout who makes it clear why anyone would put up with his character’s immaturity and slovenliness for more than a few minutes – you can’t help but love this guy! Together, they make a brilliantly funny heroic duo who handle the pesky zombies and the ensuing mayhem with the innate skills that only sitting on one’s ass playing video games and watching movies can develop.

Shaun of the Dead will make you laugh, make you squirm (some of it is actually rather gory) and may even make you a little misty, but it will definitely provide a shamelessly entertaining couple of hours.