This astonishing true story of an adoptee that was lost, then found is elevated by the wonderful performance of a ridiculously sweet child actor who steals the whole movie.
By Lindaon May 4, 2017
0 Comments
Our Rating 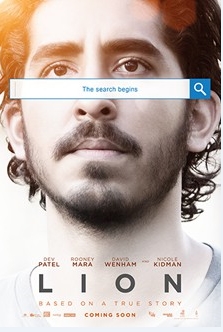 Saroo Brierley’s story is one of those that would be too astonishing to make up. As a child in India in the 1980s, he was out with his brother at night scavenging for money in railcars when he fell asleep at a train station a couple hours from home. When he woke up, he was alone and confused, so searched the nearest railcar for his brother. Next thing he knows, he is stuck in the train, unable to get out as it hurls across the countryside, over 1200 kilometers to Calcutta. Five-year-old Saroo was suddenly lost, far from home, in a strange city.

Lion is a film of two periods of time, of two completely different lives lived by the same person. Adult Saroo (Dev Patel), who was adopted after being plucked from the streets of Calcutta, is now an Australian with two doting white parents (Nicole Kidman and David Wenham). He has distant memories of India, including mental images of his town, the train tracks, and a water tower. He even has a rusty name of his old village, a town that no one was able to find based on the description of a little kid. But in the new millennium, there is a thing called Google Earth, where you can click around the globe, looking down on land and towns and streets from a bird’s eye view. Saroo, the adult, becomes obsessed with finding his home village (and mother and brother) that he last saw as a little child.

Lion, the story, is pretty amazing, and the first half of the film where Saroo is a child (played by the self-assured and screamingly cute Sunny Pawar) is captivating. Little Saroo adores his kind older brother Guddu (Abhishek Bharate), following him around, begging to not be left behind. Though they live in poverty, their small lives are filled with simple happiness… so when little Saroo finds himself lost, it takes all your self-control not to reach through the movie screen and scoop up the kid protectively to help him back home.

The second half of the film with adult Saroo is fine, but suffers a little bit from an increasingly disheveled Dev Patel forced to emote while clicking a computer screen and staring at thumbtacked maps on his walls. There is only so much you can do in that context, and the filmmakers seem to know it. Visions and flashbacks are interspersed as he gets closer to his goal, but in the meantime Saroo is a kind of crappy boyfriend to his lady (Rooney Mara) and a crappy son to his wrecked mom (Kidman).

Unsurprisingly, Lion is ultimately a tearjerker, and deservedly so. Touching on identity and culture, as well as the sometimes controversial world of international adoption, there are several intriguing themes explored. Plus, with The Weinstein Company stamp of approval, this is the kind of movie that is catnip for year-end awards. But the biggest reason to see it, and a very good reason at that, is for little Sunny Pawar. His performance alone is worth the price of admission.