As far as true stories about unsung heroes goes, Hidden Figures is a family friendly feel-good flick that nonetheless simultaneously tackles some serious issues in an easily digestible way.
By Vickieon May 4, 2017
0 Comments
Our Rating 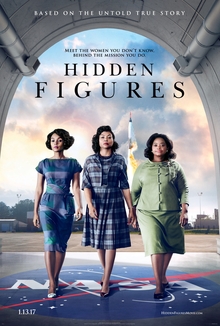 Set in the early 1960s, the film follows a trio of black women working in NASA’s computing division. Or, more accurately, as NASA computing division (back before machines did all the thinking, people did the computing and were called “computers). Katherine Johnson (Taraji P. Henson) is a mathematical genius, whose cat-eye glasses and anxious demeanor mask a killer mind; Dorothy Vaughan (Octavia Spencer) runs the computing division and longs for a promotion, but is repeatedly thwarted by her icy boss (Kirsten Dunst); and Mary Jackson (Janelle Monáe) wants to be an engineer so she can stop playing a supporting role at the agency.

When Katherine’s aptitude catches the eye of the powers that be, she’s called up to the big leagues: working in an all-white, all-male engineering branch under the watchful eye of prickly but fair Al Harrison (Kevin Costner). Being a woman in that environment is challenging enough, but being a black woman even more so – not only can Katherine not use the office’s communal coffee pot, she’s forced to trek half a mile to the nearest segregated women’s washroom anytime she has to pee. Perhaps not surprisingly for a film of this ilk, it’s not too long before what’s on the inside (Katherine’s brains) overshadows what’s on the outside (her gender and skin color) in the eyes of her bristly colleagues as she helps calculate trajectories for John Glenn’s inaugural trip into orbit. Her friends, meanwhile, each struggle to overcome the obstacles in their respective paths in very clever ways.

Based on the book of the same name by Margot Lee Shetterly and directed by Theodore Melfi (St. Vincent), Hidden Figures makes no bones about appealing to a broad audience, and it’s crowd-pleasing tactics (not the least of which is a bouncy soundtrack courtesy of Pharrell Williams) work. And woven into its colorful, cheer-for-the-heroes fabric is a history lesson that takes a safe but still effective look at the racial and social injustices of the era.

The cast is strong – Spencer, Monáe and Costner are terrific – but Henson feels a little miscast as the bookish Katherine. Anyone who’s seen Henson’s stellar work before knows she can make award-winning mincemeat of any strong-woman role, but – earnest thought it may be – her shrinking-violet attempt here comes off rather clunky and forced. Fortunately for her, two of her co-stars fare worse: Jim Parsons and his performance as a self-important, super-smart engineer smacks of a phoned-in Sheldon Cooper v.2.0, while Dunst’s racist office manager suffers from both cheesy caricature-itis and an iffy Southern accent that repeatedly drifts in and out.

Overall, though, Hidden Figures is a satisfying inspirational biopic that tells a largely untold story about some truly remarkable women (though, NBC’s Timeless beat it to the punch by about six weeks). And, unlike many January big-screen releases, it’s actually a good movie worth checking out.