Margaret Mitchell’s Gone With the Wind: A Bestseller’s Odyssey from Atlanta to Hollywood

As if she wasn’t on my short list before, sassy and spirited Margaret Mitchell has now become the “Famous Person (Past or Present) That I’d Most Like to Have a Cuppa With”. 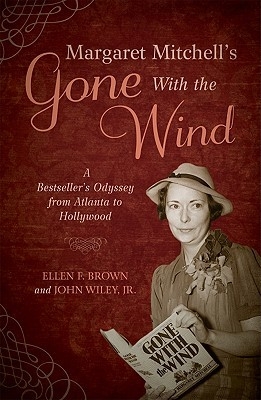 I’m the first to admit that Margaret Mitchell’s Gone With the Wind: A Bestseller’s Odyssey from Atlanta to Hollywood is not for everybody. Heck, it may not even be for folks that are huge fans of the movie. This is a book about a book. It is a book about a writer releasing her years-in-the-making labor of love into the world, and all of the hassles that came about when said book became a record-breaking monstrous worldwide success.

Published in 1936, Gone With the Wind was Margaret Mitchell’s first and last book. Writers Ellen F. Brown and John Wiley, Jr. use Mitchell’s and others’ private writings and correspondence to color this exhaustive profile of the GWTW book sensation. The result is a fascinating peek into how one woman journalist not only managed to get her behemoth book published, but how the publishing house Macmillian pulled all sorts of tricks and marketing stunts to make it an unparalleled success, even in the midst of the Great Depression.

I described this book to a friend as “publishing porn”, because really this book is more about publishing (especially publishing in the 1930s and the decades following) than it is about GWTW itself. For instance, there is the charming look into Margaret Mitchell’s mood as the first printing came back for proofing: “I can’t even endure to look at the book because I nearly throw up at the sight of it.” There is Mitchell’s adamant refusal to do a promotional speaking tour (despite great demand) after an early disastrous talk at a writer’s group. Mitchell swore to her publisher friend Lois Cole that she would never speak in public again, saying the experience was so horrible, it was second only to when “I dropped my drawers in the church aisle when I was six or seven.” Margaret Mitchell’s true spirit is evoked in these many excerpts from her private letters. Plus, who wouldn’t want to meet a sassy young woman who performed a scandalous Apache dance as a student, and was photographed determinedly petting a giant iguana when she was a young woman?

By the book’s first anniversary in 1937, an estimated 1,350,000 copies of Gone With the Wind had already been published, which is pretty amazing considering the movie hadn’t even been filmed yet. In fact, the sale of the movie rights was a whole ‘nother thing, considering Mitchell thought she got a good deal when David O. Selznick paid $50,000 very early on for the rights, but learned later that if she had held out, she could have been paid much, much more. In fact, Mitchell, her lawyer brother Stephens Mitchell, and her husband John Marsh, were so closely involved in all of the legalese about the book, such as dealing with foreign copyright issues, stopping people from using the characters in anything from musicals to fan fiction, and reviewing various book editions for quality control. GWTW essentially became a full time job for the Mitchell-Marshes until their deaths (Margaret was infamously struck by a car on Peachtree street in 1949, dying a few days later).

Margaret Mitchell’s Gone With the Wind may not be for the casual reader. In fact, some of the information may seem dry and repetitive if the world of publishing isn’t already of interest. But, shoot, I’m not only a huge fan of GWTW, the book and movie, but I work in publishing and am currently in library school. Count me in as a target audience! Paper quality, proofs, page counts, and print editions may not strike an average reader as interesting. But for readers that are serious collectors of GWTW (the print book), people that are interested in the history of publishing (and the tangled legal problems for published writers that are as relevant now as they were in the 1930s), and people that are hardcore (really hardcore) GWTW fans will all find this book a real treat.