Let me begin by saying: no one is more surprised than I that this frat-boy comedy is not only pretty funny, but has a really surprising sweetness to it. And, as a result, I really liked it.
By Vickieon October 13, 2014
0 Comments
Our Rating 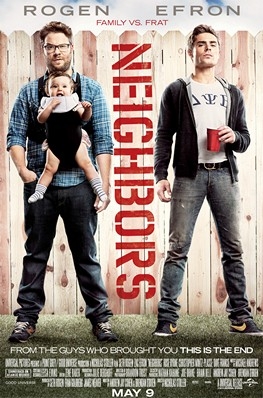 And, you know, maybe I shouldn’t have dreaded it as much as I did. After all, it’s directed by Nicholas Stoller, who’s responsible for a trio of enjoyable comedies: Forgetting Sarah Marshall, Get Him to the Greek (which I loved) and The Five-Year Engagement (Emily Blunt – ‘nuff said). So, to discover that this Seth Rogen vs. Zac Efron battle of sabotage one-upsmanship actually has a heart, and is more than just a base comedy filled with d**k jokes, shouldn’t have been so unexpected.

Rogen is Mac Radner, who’s straddling the divide between carefree youth and adult responsibilities. He and his wife, Kelly (Rose Byrne), live in a great big house, have an adorable daughter (Elise and Zoey Vargas, who share the role of the most insanely cute big-screen baby since Diane Keaton’s charge in Baby Boom), and are very reluctantly settling into their lives as grown-ups. When the house next door is sold to a fraternity, the gap between who they once were and who they’ve become becomes even more evident, as they promptly get on the wrong side of frat brothers Teddy (Efron) and Pete (Dave Franco). Why? Because, after initially hitting it off with the young bucks, Mac and Kelly realize they like peace and quiet, while the frat boys revel in sex, music, parties, drugs, and lots and lots of noise.

Not nearly as low-brow as its premise would have you believe, Neighbors is a zippy, laugh-out-loud comedy grounded in some believable, lovable relationships – the one between Mac and Kelly, the one between Mac and Teddy, and the one between Teddy and Pete. Each one’s different but, despite the nature of the film, all are three-dimensional and (again, color me shocked) nicely fleshed out. It helps that the chemistry between them all totally works. Yes, there’s plenty of R-rated humor to keep teenaged boys rolling in the aisles, but it’s balanced out by the film’s decidedly mature undertones.

While the quartet of lead actors is strong, Neighbors is also blessed with a terrific supporting cast, including Ike Barinholtz as Mac’s best friend, and Lisa Kudrow as a college dean hell-bent on maintaining her school’s good name.

Goofy and good-natured, racy and real, Neighbors will no doubt have broad audience appeal and, for the first time in many Seth Rogen movies, I’m actually one of the people who found it appealing. Who knew?