Count me as one of the people who was suuuuper-psyched to see this much-anticipated sequel to 2012’s The Amazing Spider-Man, which I absolutely LOVED (I gave it a full pie!). Unfortunately, perhaps because its awesome predecessor set my expectations much too high, I found this outing very long, very dull and, despite a slew of action sequences, pretty slow. 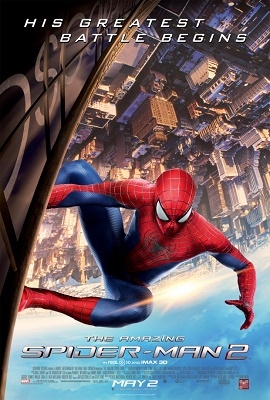 Andrew Garfield once again steps into Spidey’s suit (and Peter Parker’s shoes), this time dealing with a pair of nefarious foes – Jamie Foxx’s nerd-turned-villain Electro, and Dane DeHaan’s hugely petulant and highly annoying Harry Osborn/Green Goblin – while simultaneously trying to work out the intricacies of his romance with girlfriend Gwen (Emma Stone) and uncover the truth about why his late father (Campbell Scott) left him to be raised by his saintly Aunt May (Sally Field). That’s a whole lot of stuff for one spindly high-school graduate to handle, nevermind one who also has to keep the entire city safe from ne’er-do-wells while he does it.

Problem is, everything in The Amazing Spider-Man 2 plods along very slowly, and “just get ON with it” kept repeating in my head. There are many conversations made up of needless filler – did we really need to spend that long having Peter argue with Aunt May over laundry? Did the flashback to a plane crash really need to take up as much time as it did? And how often did we really need to listen to Peter and Gwen discuss their relationship (it’s on, it’s off, it’s on, it’s off… and let’s talk about it every time!). There’s a beauty in brevity that was clearly lost on the filmmakers and screenwriters.

In a similar way, the numerous chase/fight/battle scenes seemed to just go on and on and on and ON, and felt like they were more about showing off what the effects team could do rather than a way to serve the story. They were frenetic, tedious and the latest passengers on the destruction-porn bandwagon plaguing so many popcorn movies these days. You know the kind, where a city is levelled (and, presumably, hundreds of people die) for the sake of entertainment. Good times.

The performances in the film range from very strong (Garfield is a terrific actor, and gets several opportunities to demonstrate his skill) to superbly silly (DeHann’s Harry is a one-note fit of self-absorbed-hipster rage from the second he appears onscreen), with Stone and Field not getting the quality material they enjoyed in the previous Spider-Man. Worse, neither villain is particularly compelling – Electro seems to sort of (?) want to destroy Spider-Man, but he wavers. And, half the time, Harry behaves like a spurned lover towards Peter, not a long-lost best pal (look for the HoYay! and you’ll see it clearly). What about Giamatti’s Rhino, you ask? Not significant enough to merit review, really.

Worst of all, though, the film has no ending. It literally cuts to the credits as another fight scene is about to get underway, which means a third film in this series is clearly on deck. Hopefully, the inevitable The Amazing Spider-Man 3 will be an improvement over this one. At the very least, my expectations have been decidedly lowered, and my fingers are crossed accordingly as a result.