The subject is touchy and the main character crass, but the film is not crass when it comes to surprising emotion.
By Lindaon October 13, 2014
0 Comments
Our Rating 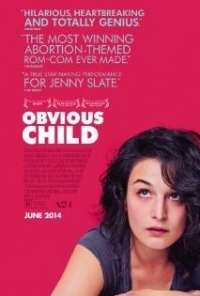 Yes, this is the comedy about an abortion. Let’s just get that out of the way. For a topic that affects over a million women a year in the U.S. (not to mention their partners), this is pretty much the last taboo in Hollywood. When you look at it that way, it is surprising that this movie got released, and I’m sure a lot of people will get hot and bothered without even giving the film a chance.

But Obvious Child is funny. It’s gross. And it is also surprisingly sweet.

When you are a stand-up comedian like Donna (Jenny Slate), it might not be best to go into great detail about your stale sex life when your boyfriend is in the room. But he gets the last laugh in the club’s restroom when he dumps her. Donna spirals into self-pity and misery. After a wretched comedy routine one night where she is completely plastered, she meets a cute, fratty-kind of guy named Max (Jake Lacy) and they have a good-natured, one-night drunken fling.

Like in reality, this is not always the end of the story. Donna finds out she is pregnant.

Obvious Child is never dismissive about Donna’s situation, and despite her raunchy language and shocking jokes about her condition, neither is Donna. She pretty much knows right away that everything points to her not having the baby, for many reasons. But there is guilt, sadness, embarrassment, and lots of tears as she works through the decision with her best friend (Gaby Hoffman) and her mom (Polly Draper), both of whom (like so many women in real life) have stories of their own.

But it most be noted that the film IS funny. Jenny Slate talks about vaginas, farting, pee, and various unspoken discharges that had the audience (especially women) guffawing knowingly (and I’m sure some men cringing). It’s not shocking (at least for me) to hear that kind of talk coming from a woman (raise your hand if you have potty-mouth female friends), but it IS kind of shocking (and refreshing) to see it in a movie. Obvious Child may not be everyone’s cup of tea, humor or topic-wise, but it definitely worth catching for the curious and open-minded.