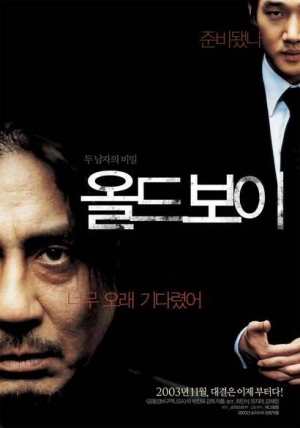 If you’ve read enough of my reviews, you know that I rarely sum up a movie so, um, bluntly. But by the end of Oldboy, my jaw had been hanging slack for the final 20 minutes, and it stayed in that position through the closing credits until the screen went black. Oldboy is the revenge flick that Quentin Tarantino would love to make, if he learned to stop being ironic. With a rare physical and emotional intensity, Chan-wook Park’s brutal film plays it straight—as straight, that is, as a totally fucked up, twisted, and wrong story can be.

After a drunken binge out on the town, salaryman Dae-su Oh (Min-sik Choi) disappears into the night and wakes up in a sort of private prison. It looks like a ramshackle apartment, replete with bad wallpaper and TV, but food is slid through the door, and every time he acts up, gas comes from pipes and knocks him out. Via the television, he learns that he is wanted in the outside world for the murder of his wife, and his young daughter has been sent away. His rage builds over the years, with fury building at his unseen jailkeeper. He lusts for revenge for all that he has lost.

As abruptly as he is imprisoned, he is suddenly freed after 15 years, dropped off unconscious in a suit of nice clothes, with a cell phone, and the cryptic instructions that he has 5 days to figure out who put him prison, and why. To give away any more would be a shame, as park of the fascination in watching Oldboy is watching the plot and the mystery unfold. First the film seems Kafka-esque, then it seems to veer into a typical (if a little off) revenge flick, then it culminates as a shocking Greek tragedy. Like I said, my jaw had dropped long before the credits rolled.

The Oldboy DVD includes treats for all those uber-fans out there, like director and cinematographer commentary, some deleted scenes, and an interview with Chan-Wook Park. Park won the Grand Prize for Oldboy at Cannes in 2004 (the year that Tarantino himself headed the jury). Impressively, IMDb readers have voted this film on the cusp of their top 100 films of all time. Is it that good? For those with a strong stomach, it is—and I guarantee that if you can sit through Oldboy, it will stick in your craw long after you are done.