O Brother, Where Art Thou?

O Brother, Where Art Thou? is probably the only movie in recent memory that credits Homer’s Odyssey in the opening credits as a source. It’s been a long time since I read that (wait… did I ever read The Odyssey??), but I could still pick the scenes that were obviously lifted from classical inspirations.
By Lindaon May 6, 2014
0 Comments
Our Rating 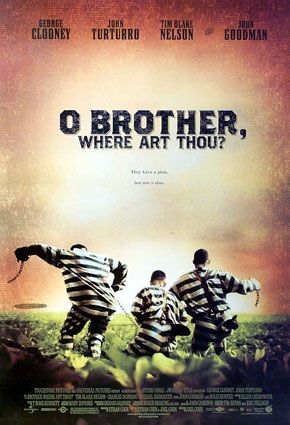 Everett (George Clooney), Pete (John Turturro), and Delmar (Tim Blake Nelson) are cons on the run from the law, after they make their great escape from the chain gang (oh, it takes place vaguely in the 1930s) in the first scene of the movie. Everett has convinced the other two dimwits to break out of prison with him in order to find a treasure of buried loot that will make them all rich. Along the way, they encounter a range of wacky situations and strange characters that test them on the way to their goal (ahhh… the classic hero’s journey!). It’s the Depression-era, in the deep South no less, so there is plenty of fun poked at small town, small-minded America. Let’s just say, there’s plenty of overalls and falling-apart shacks in this flick, not to mention brushes with machine-gun wielding gangsters and the KKK.

Turturro and Nelson are absolutely hilarious as Pete and Delmar, the not-too-bright portion of the trio. Clooney, however, will always be George Clooney in any movie he makes… Though I enjoy him as an actor, he has yet to convince me that he can disappear into a role (maybe even Dr. Ross on ER was actually George playing himself?). Not that he was bad in O Brother, but whereas Turturro and Nelson became their characters, Clooney seemed like he was trying a bit too hard.

O Brother, Where Art Thou? has an exceptional soundtrack of Depression-era old-school bluegrass music, which is a recurring theme both in the story and in the background of the film (check out the concert film Down From the Mountain showcasing the film’s music). Plus the look of the film is lovely. It has a washed-out gold and grey look, like a faded color photograph, that adds to the atmosphere of the story.

Despite pacing that is sometimes a bit uneven (a couple times I found myself wondering how many trials and tribulations there were in The Odyssey), O Brother definitely has its share of hilarious moments. It’s quirky enough to be memorable, and witty enough to be a relief from usual studio fare.