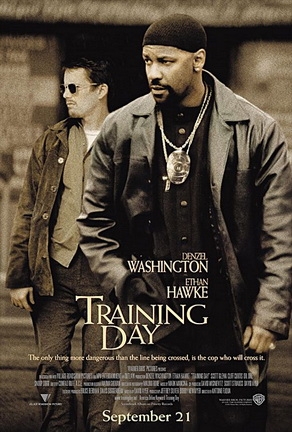 Denzel Washington is just so damn good that he can play a bad guy so despicable and sleazy that it nonetheless takes most of a film for the audience to hate him. Talk about charisma to burn. As far as him winning the Best Actor Oscar for 2001 for Training Day, well, I’ll just say that Denzel is not capable of a bad performance… but was this a career high, worthy of awards? Well, check it out for yourself.

Ethan Hawke plays Jake Hoyt, a young cop sent out for a training day with seasoned vet Detective Alonzo Harris (Washington). Jake wants nothing more than to get his experience in the field as a narcotics street cop in order to make detective, but the seedy street life that Alonzo introduces him to is not quite what he had in mind.

How do you spell “corrupt”? Alonzo is so ridiculously corrupt that you can’t help but be as baffled by his behavior as poor Jake is. And are cops’ lives really this exciting? In one day our guys encounter or take part in the drug bust of some college students, an almost-rape and ass-kicking, the smoking of PCP, a robbery (or two), and even murder. Would you believe me if I told you that is an incomplete list? And I thought that cops just took several two-hour donut breaks and stood with their arms crossed on tourist-infested sidewalks!

Training Day could very well have been a typical good cop/bad cop run-of-the-mill violent street movie. But the A-list cast makes the often-implausible film downright watchable for most of its length (only slightly overstaying its welcome after two hours). Denzel and, yes, Ethan are both very strong (Ethan himself got a Supporting Actor nomination for this film). Sprinkled throughout are some recognizable faces, like Tom Berenger as a higher-up in the LAPD, and Scott Glenn as a drug dealer.

Credit must go to the casting director for making what could be throwaway showy roles totally memorable, like that of Smiley, a menacing but honor-bound gangster, played with fierce restraint by Cliff Curtis. But most surprising, and most fun, are the pop and rap singers that show up in supporting roles. Dr. Dre is adequate as a narcotics cop, but Snoop Doggy Dogg is totally great as a wheelchair-bound drug dealer. Macy Gray is a hoot, and downright creepy as the wife of a major dealer (you can tell she crawls right under Jake’s skin). With her painted claws, and bright tight clothes, she looks just like the freaky neighbor that could chase you screaming down the street.

The usual suspects: A short making-of documentary that is most interesting when it shows the on-location shooting in “the jungle” of the sketchy parts of L.A.; an audio commentary by director Antoine Fuqua; an alternate ending (that rightfully flops… I’m glad they didn’t use it); and deleted scenes (some worth watching, others just space-filler).