Parental Guidance has the odd distinction of feeling as though it escaped from the 80s or 90s and is struggling to conform to the current standards of political correctness.
By Jenniferon April 6, 2013
0 Comments
Our Rating 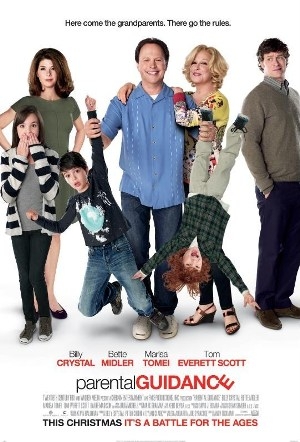 Growing up, I thought of family films as movies about families. There were kids and parents and older sisters or brothers, and sometimes even extra relatives like grandparents or aunts and uncles and cousins. You know, families, and because we’ve all got one, there was always something to relate to in those movies. You would still hear the occasional swear word and sometimes uncomfortable topics would come up, but just as in real life, most of that would go right over your head. Luckily, that meant there was something for your parents and that there was something for you when you watched the movie again when you got older. Lately, though, family films are just movies that have been sanitized to appeal to a wide audience without offending or confusing anyone. Parental Guidance is a perfect example of this phenomenon, and is very unlikely to warrant a second viewing for anyone.

Parental Guidance has the odd distinction of feeling as though it escaped from the 80s or 90s and is struggling to conform to the current standards of political correctness. In some ways this is absolutely appropriate, since Artie (Billy Crystal) and Diane Decker (Bette Midler) spend most of the movie feeling the same way. Their old-school parenting style stands in stark contrast to the namby-pamby sensibilities of modern child-rearing, and their daughter Alice (Marisa Tomei) blatantly avoids them to prevent any potential conflict. Just dialing their phone number is enough to give her a rash, but, you know, not such a bad rash that she wouldn’t ask them to babysit while she goes on a business trip with her husband. Naturally, Diane and Artie oblige because they are (wait for it) totally decent people!

Though Alice’s boundary issues are universal enough, the fact that she has essentially cut ties with her parents seems more mean-spirited than self-protective. Keep in mind that all of this takes place in an upper middle class universe where Diane and Artie’s greatest offenses are eating sugar and using the word “no” (instead of the more diplomatic “consider the consequences”). Predictably, comedy and chaos ensues when Diane and Artie do crazy inappropriate things like let the kids eat cake, or when Artie assumes that the boys’ baseball team actually keeps score. Inevitably then, Alice grabs at her hair, announces that she just can’t trust her parents, and Artie gets smacked in the crotch with a bat. You get the idea.

The film is essentially a series of setups for slapstick punchlines and pratfalls which defy plausibility and common sense. This however, qualifies as comedy (look, people falling, ha ha!) without actually requiring any thought or risk. Buried under all the mud and frosting is a smidgen of social commentary, however hesitant, on the benefits of bridging the generation gap. It turns out that Diane and Artie have plenty to offer Alice and the grandchildren, and just because their take on life is different, doesn’t mean it’s wrong. Their out-of-the-box (i.e. traditional) tactics have surprisingly refreshing results, and it’s clear that parents and children can learn a great deal from each other. Again, very little is risked in conveying this message when you’ve got a a bunch of nice, upwardly mobile people trying to reconcile over an imagined breach.