I find Jaden Smith insufferable. That said, I actually enjoyed this remake of the iconic 1984 film of the same name.
By Jenniferon June 20, 2010
0 Comments
Our Rating 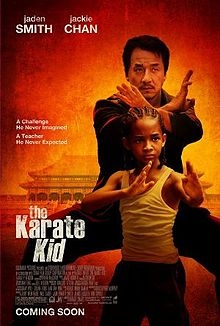 When 12-year-old Dre Parker (Smith) and his mom (Taraji P. Henson) pack up their lives in Detroit and move to China – for reasons that are never fully explained – the pint-sized American becomes the target for bullying by a gang of preteen thugs at his school. Led by the ferocious, pitbull-like Cheng (Zhenwei Wang), the boys administer frequent, and rather savage, beatings to Dre… just because he goes all doe-eyed for aspiring violinist Meijing (Wenwen Han) in the film’s completely needless and somewhat icky “love story between children” romance subplot.

Enter reclusive handyman Mr. Han (Jackie Chan, turning in a really beautiful, nuanced performance), who says little but sees all and who, after rescuing Dre from one of the gang’s smackdowns, offers to teach the boy kung fu. The goal? To fight each of the bullies – who all train under a maniacal, wrath-filled coach – one by one at a tournament.

What follows is essentially a reimagining of the original’s plot, as Han uses unconventional methods to instill the values and moves of kung fu on his overeager young pupil. Instead of painting fences or waxing on and off, everything Dre needs to learn can be found in the actions around taking on and hanging up his jacket. A little less poetic, but still effective.

Gorgeous cinematography provides the backdrop for the Dre vs. Goliath tale, as the characters make their way through some of China’s most well-known locations (including the Great Wall and the Forbidden City). The choreography in the spectacular fight sequences never disappoints, even if it does veer into the realm of surprisingly violent (given the “family” nature of the film). Though rather long at nearly two and a half hours, the story clips along at a brisk pace and never lags, and the contains the requisite amount of heart… all of which comes courtesy of Chan’s character, a broken man struggling to deal with the pain in his life.

Unfortunately, what’s been lost in this updating is what made the original a classic that’s just as excellent today as it was then: the likeability, warmth and charm of the lead character. Dre Parker is no Daniel Larusso.

While he looks like he’s about seven, Jaden Smith often acts and behaves as if he’s an adult, in terms of attitude and ego, and that becomes obnoxious. It bleeds through into his character here, making Dre come off as a bit of a smart-ass and a know-it-all, which sometimes makes it hard to root for him. Smith does have a few moments where he dials it all down and lets the vulnerability up to the surface but, as good as those are, they are few and far between.

Anyone who’s seen the 1984 version of this film will be unsurprised by anything that occurs narratively, and will be able to telegraph the ending from the get-go. That said, it’s still an entertaining journey on its own. Was it necessary to remake The Karate Kid? No. Does this incarnation measure up to the original? Not entirely.

Is it nonetheless a worthwhile summer movie? Yes.