Queer as Folk: Season One

Showtime’s Queer As Folk promised to take audiences where American television hadn’t dared venture before: a gay TV series that (*gasp*) let its characters have sex lives! And MY how they do have sex! 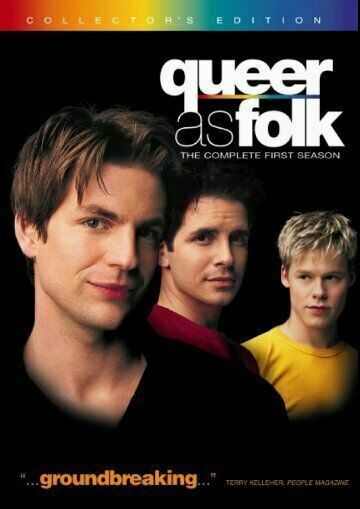 Since QAF was a U.S. interpretation of a hugely popular British TV series (that had nothing to hide), critics were afraid that the Showtime version would get all squirrelly and be more tame. Not to worry, kids! The U.S. Queer as Folk certainly lets it all hang out, and more, as every week viewers are treated to plenty of, um, let’s say vivid sex scenes that most likely will raise the eyebrows of both gay and straight viewers alike. Hoorah for cable TV!

Queer as Folk centers around a circle of friends in Pittsburgh. There’s Brian (Gale Harold), a sleazy Lothario who is more than a bit of an asshole. He can have any man down at the Liberty Street gay bars… and he does. Still, his sweetie-pie best friend Michael (Hal Sparks) puts up with his antics, basically because he has always been in love with him.

The series opens with Brian “having” two children in one night. Lesbians Lindsay and Melanie (Thea Gill and Michelle Clunie) have just birthed baby Gus with a little help from Brian (so to speak). But he misses the actual event because he was, shall we say, “busy” with a 17-year-old, Justin (Randy Harrison), whom he picked up for that night’s fling. Unfortunately for Brian, Justin, in his starry-eyed youth, thinks the night was more than a fling and totally falls for callous Brian….

Thus begins just one plot thread weaving, twisting, and turning through season one of Queer as Folk. Throw in a handful more of characters, like Ted and Emmett (Scott Lowell and Peter Paige), Brian and Michael’s clubbing friends, Dr. David (Chris Potter), a love interest for Michael, and Debbie (Sharon Gless), Michael’s rainbow-flag-waving PFLAG mother, and you basically have a weekly one-hour soap, with plenty of eye-candy, thumping club music, comedy and drama.

Through this first season, I have to say the show suffers a bit from acting, with some actors coming off better than others. Unfortunately (since he is one of the main players), Gale Harold’s Brian doesn’t have any of the charm (like his UK counterpart, Aiden Gillen’s Stuart) that makes you understand why his friends put up with him. It is not until the very end of the season that he shows some depth of range. Plus he has a bad haircut.

But several of the more minor players steal every scene they are in. Peter Paige (apparently one of the actors with the shortest resume) is wonderful as the unabashedly flaming Emmett. He’s adorable and genuine. Michelle Clunie, as hard-ass lawyer Melanie, has a tough role of hating the biological father of her girlfriend’s baby while still being a loving mother to the child. She manages to be tough-as-steel without being a bitch. And what a delight it is to see Sharon Gless back on the TV screen! Her over-the-top “I love my gay son!” mom Debbie is hilarious and touchingly real. Plus she curses like a sailor, something that I always knew was bubbling under the surface of Chris Cagney, her role from the classic woman-cop show Cagney & Lacey.

Watching the first 3 and last 3 hours of Season One on DVD (the promo people only provided me with Discs 1 and 6 to review! the nerve!), I had to admit I was hooked despite my few quibbles. Being teased by a few hours of this show, I had to run out to the video store and catch up on what happened in the entire middle of the season.

So… does anyone have cable so I can come over on Sunday nights and watch Season Two?

The QAF DVDs (including all 22 episodes of the first season) offer some nifty treats for the fans, with things like outtakes, cut scenes (some VERY sexy! oh my!), interviews, plot synopses for every episode of Season One, and an extensive teaser for Season Two (which in my opinion gave a bit too much away, considering the cliffhanger ending of the first year). Also included are “special editions” of a handful of episodes, where cast interviews are interspersed with the action (this is done in a nice “split-screen” way where you can see the actor and the scene at the same time). I enjoyed this feature much more than the typical audio commentary, especially seeing all the actors pleasantly discussing their characters’ actions… all except for Michelle Clunie, who fervently spoke in the first person as Melanie. Hmmm, Michelle, the show is fiction!