North to Alaska is one of those cornball, over-the-top cartoony Western comedies that I would have totally loved as a kid. This is the type of movie that starts and ends with an extended fist fight involving a mob of good guys and bad guys… and sometimes a goat. What’s funnier than a man belly-flopping into a trough of mud or getting tossed out of a window? Nothing, really. 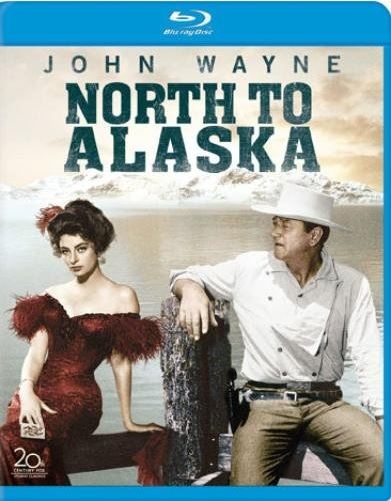 It is 1900, Nome, Alaska, where a gold rush is in full swing. Sam McCord (John Wayne) and his buddy George Pratt (Stewart Granger) have done just fine (which is shown by Sam guilelessly carrying around a bag of cold hard cash). George is going to work their claim, while Sam returns to Seattle to pick up George’s fiancé of three years. Problem is, when Sam goes to pick up the lass (she’s a maid in a mansion that looks hilariously like a Southern plantation), she is already married! Well, what to do except pick up another girl that should do just fine for his buddy.

Sam doesn’t have much of a way with women, so it is not really much of a stretch that he finds a prostitute to be the perfect commodity to substitute for the old fiancé. It turns out (unsurprisingly) that “Angel” aka Michelle (Capucine) has a brain, and blossoms when a man actually respects her. But of course it is Sam and Angel falling for each other (Sam is the last to know, being a clueless brute), and George finds that his new “gift” of a potential bride actually has an opinion.

The setting for North to Alaska is gorgeous, with most of the action taking place at the riverside cabin where Sam and George, along with George’s little brother Billy (Fabian, with perfectly-coiffed 50s Beach Boy hair) have staked their claim. There is a scheming con-man/villain from town named Frankie (Ernie Kovacs, who is practically twirling his moustache). Frankie proves a real threat, not only for his shady past with Angel, but for the fact that through his devious ways, he attempts to “claim-jump” and steal Sam and George’s gold-laden spot as his own (this was apparently a real problem during gold rushes).

North to Alaska is a silly, entertaining romantic comedy-slash-adventure with an aw-shucks appealing performance by an aging John Wayne. If I remember anything about this cornball Western comedy, it will be Johnny Horton’s catchy title tune, which is an earworm if I ever heard one.

NOrth to Alaska has been digitally restored and released on Blu-ray as part of 20th Century Fox’s “Voice Your Choice” campaign where classic films were selected for release by fan votes. Extras are sparse, but one made me laugh out loud: In the brief Fox Movietone News clip “North to Alaska Premiere Besieged by B’way Throngs” the announcer breathlessly shows a dog sleigh prop outside the theater, in which sits “Annette Driggers, who lost the Miss USA title because she’s only 15!” In the meantime, throngs of screaming teens crowd dreamboat Fabian for autographs. Har!