It seems as though the sad news out of Hollywood is neverending these days. Today we say goodbye to Merlin Olsen, better known to some of us as Jonathan Garvey on Little House on the Prairie. Olsen died at the age of 69, of complications of mesothelioma, a form of cancer.

Like Garvey’s friend Pa Ingalls on the show, played by the late Michael Landon, and like Dan Haggerty’s Grizzly Adams, from the same late-70s/early 80s TV era, Olsen’s character of Jonathan Garvey was both an inarguable man’s man, yet was a gentle, kind, and thoughtful person. He wasn’t afraid to get teary eyed when the kids had to put a wounded animal down, or if someone died in fire (those kinds of things seemed to happen every week on these shows). He could make the tough decisions, build a house with his bare hands, and hug a child. These shows seemed to have such a nice moral center without being preachy, and even if I had met Merlin Olsen as an adult, I probably would have wanted to give him a huge hug, just like I did when I met Dan Haggerty a few years ago.

It just feels like another friend from childhood has passed away, and I know I’ll miss knowing that this gentle giant is out there, somewhere, helping children and small woodland creatures: 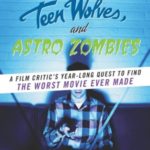