Alas, where would the world be without Rain Man?
By Jenniferon December 27, 2014
0 Comments
Our Rating 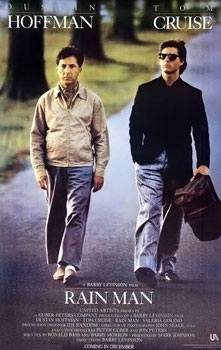 Alas, where would the world be without Rain Man?  What would we call our friends when they rattled off some obscure fact or showed signs of obsessive rigidity?  What would the words, “def, definitely,” mean without him?  The movie has become so ingrained in pop culture that it’s easy to forget that the film itself was quietly poignant and funny, often somber, and rather more serious than you’d expect.

Upon the death of his parents, freewheeling bachelor Charlie Babbit (Tom Cruise) discovers that he has an older brother.  Raymond (Dustin Hoffman) has been institutionalized since Charlie was a small child, but somewhere, in the darkest corner of his consciousness is the memory of an imaginary friend called Rain Man, a friend who turns out not to be so imaginary after all.  With the arrogance of a twenty-something young man, Charlie removes his brother from the institution for some getting-to-know-you time, an undertaking that turns out to be far more challenging, humbling, and rewarding than he ever imagined.

Part road movie and part family drama, Rain Man chronicles the brothers’ journey to Las Vegas and to their bittersweet acceptance of one another.  Channeling the intensity that used to seem more like passion than insanity, Tom Cruise is well suited to his role as Charlie Babbit.  This selfish, vaguely insensitive young whippersnapper is forced to slow down and plumb deeper in order to relate to an autistic man who is more stranger than family.  Dustin Hoffman is flat brilliant as Raymond, weaving endless idiosyncrasies into his performance without ever turning his character into a caricature: that task would be left to a world full of viewers who took on Rain Man and made him their own.

The Blu-Ray of Rain Man includes extras from the 2004 DVD release, including feature commentaries from director Barry Levinson and co-writers Barry Morrow and Ronald Bass. There is also a retrospective 22-minute featurette, “The Journey of Rain Man” (but Tom Cruise and Dustin Hoffman are notably MIA from the interviewees), a deleted scene, original trailer, and a piece called “Lifting the Fog: A Look at the Mysteries of Autism,” covering how autism was depicted in the film.