Rise of the Guardians

If kids not longer believe in Santa Claus, the Easter Bunny, and the Tooth Fairy, well, they may fall for the idea that they are members of a badass group of Guardians, whose job it is to protect the imagination of children. 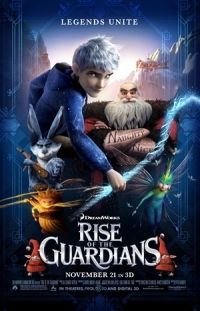 After the surprisingly excellent How to Train Your Dragon, Dreamworks Animation scores another winner with Rise of the Guardians. Though it may not reach quite the soaring heights of Dragon, it still has thrilling action and mind-bogglingly great animation.

Imagine that Santa Claus is a tough, tattooed, Russian-accented guy called North (Alec Baldwin). In his shop, the ding-a-ling elves are admittedly useless, so all the actual toy-making is done by a crew of grunting yetis (YES). The Man on the Moon (huh?) informs North that trouble is a-brewing. See, the Boogeyman, named Pitch (Jude Law), has resurfaced and is threatening the innocence and imagination of the world’s children. It is up to North to gather his team of Guardians to beat the Boogeyman and keep the world from turning into a place of darkness and fear.

The Guardians of childhood include the wisecracking, boomerang-wielding Easter Bunny (Hugh Jackman), the cherub-like golden swirl the Sandman (speechless, yet adorably expressive), and the charming and kind Tooth Fairy (Ilsa Fisher, pulling the Token Girl card). The Man on the Moon informs them that they will need the help of a new Guardian, and thus the wild card Jack Frost (Chris Pine) is recruited.

Jack is a loner, and a bit of an animated hottie (judging from the cooing in the audience and on comment boards online). Kids don’t really “believe” in him… he’s just kind of there to cause trouble, and more importantly, snow days (wee!). The Guardians know that Jack will somehow fit with their group, but Jack and the others don’t quite yet know how. In the meantime, Pitch is wreaking havoc and filling the children’s heads with nightmares.

So the premise, I admit, is pretty bizarre. You have a couple Christian icons (Santa Claus and the Easter Bunny), mixing with the Tooth Fairy, the Man on the Moon, the Sandman, and Jack Frost—all of whom are not exactly on the same mythical status as, say, Santa. In fact, for about 15 minutes, I couldn’t actually figure out who the cute “Sandy” was supposed to be.

But once you get beyond the mushy mythology of who the Guardians are, the story proves to be a lot of fun. I liked the idea that the Tooth Fairy keeps children’s teeth as treasures, because they are precious keys to everyone’s childhood memories. I loved this wacky version of Santa’s workshop with the grunting, sasquatch-like workers. And Jack Frost proved to be a fun and relatable lead character (despite his odd man-voice in a teen body). Though in the film as in real (?) life, the Boogeyman is pretty scary (and may scare the smallest tots), this fast-paced adventure with its cleverly original premise should definitely keep viewers of all ages entertained.