What’cha doing in your bed? You should be dancing! (Yeah!) 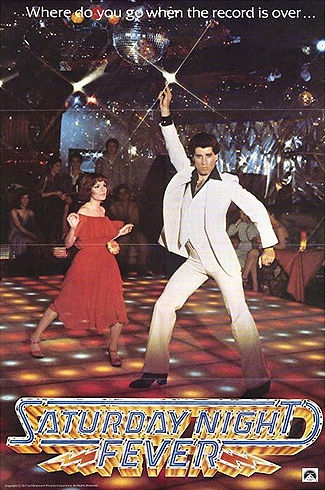 Saturday Night Fever has one of the most iconic title sequences in movie history. It is a pop-culture snapshot of the disco-era 1970s: As soon as the opening funky bass of the Bee Gees’ monster hit “Stayin’ Alive” starts, the camera shows John Travolta’s feet walking on the sidewalk, keeping step with the song, then pans up his body to his glorious leather-jacketed-self, showing his best profile as he struts down the sidewalk, swinging his paint can, checking out the girls. Yes, you can tell by the way he uses his walk, he’s a woman’s man, no time to talk! It takes all your self-control to keep from leaping up from the couch to point your finger in the air triumphantly in your best Travolta imitation.

John Travolta is young and beautiful in Saturday Night Fever, a huge star already due to “Welcome Back, Kotter” and Carrie, but heck, Grease hadn’t even been filmed yet, and with this film, he would become a superstar. He plays 19-year-old Tony Manero, a Brooklyn kid with no goals. He lives with his parents, works in a local hardware store, and lives for the weekend, when he and his Italian hoodlum buddies put on their best polyester and rip up the dance floor of the local disco, the 2001 Odyssey. At home, Tony is the washout younger brother of a golden son who became a priest (the pride and joy of any Italian family), but on the dance floor… Tony is king! The ladies worship Tony, especially needy and desperate-for-love Annette (Donna Pescow), and the crowd literally parts for Tony when he decides to let loose. It is all about Tony (which is illustrated especially hilariously when Tony dumps Fran Drescher on the floor and breaks into perhaps his most famous solo dance scene from the film).

One evening, Tony spots a new woman on the dance floor who bewitches him. Her name is Stephanie (Karen Lynn Gorney). She is older than he, is pretty, and most importantly is a better dancer than her loser partner. Stephanie may just be Tony’s ticket to finally win the 2001 Odyssey’s dance contest! Except that he already has a dance partner (Annette), and Stephanie is just not interested.

Saturday Night Fever‘s classic image is that of John Travolta in a tight white polyester suit, finger fiercely pointed at the sky in the midst of a triumphant dance moment. As I hadn’t seen this film in years, I was surprised to find that the image doesn’t actually exist in the film. When Tony finally dons the white suit, it is for the dance contest, where too-good-for-him Stephanie has finally relented and has agreed to be his partner for the big event. They stand in each other’s arms on the dance floor, staring deep into each other’s eyes—she in her flowy disco dress, he in white suit. The song begins, and it is not one of the flashy disco songs… it is the Bee Gees’ super-romantic “More Than a Woman”. Tony dips Stephanie slowly, pauses, then they begin their routine. My jaw dropped. You know what I said (to no one in particular) when the routine finished? “That’s HOT.”

Don’t be fooled as I was when I first saw Saturday Night Fever years ago. This is a dark, depressing film. Tony and his pals hit rock bottom before he is allowed to see that things may get better. There is gang violence, crass and cringe-worthy language, a rape, and a death before all is said and done. You may giggle at the fashions, but you will also appreciate moments of true humor (Tony sitting at his family’s dinner table obsessively protecting his styled hair is classic). The film is not cheesy, but is a gritty coming-of-age film where an immature kid finally grows up and becomes a man. Saturday Night Fever stands the test of time. And yes, the dance scenes are awesome!

There are tons of featurettes included on the 30th Anniversary Edition. That said, I heard just a mere few years ago that there was a pretty darn good 25th Anniversary Edition released, so you make the call if you wonder if you should upgrade. Everyone from the film is here: from the director, to the surviving Bee Gees, Barry and Robin, to Karen Lynn Gorney and Barry Miller. Everyone, that is, except John Travolta. (I suddenly have a sneaking feeling that this won’t be the last special DVD version of this classic film.) But what is included is quite fun. There are extensive featurettes about the music, the clothing, the dancing, and even a fawning tribute to Travolta himself, as all the cast and crew verbally make out with Travolta’s 1977 self. There is even a piece where a Dancing with the Stars-type couple do a step-by-step instruction for the famous dance-contest scene with Travolta and Gorney (it would take a LOT of patience to learn it this way). Put on your white suite or flowy disco dress, and start practicing! It is said over and over that none of the people involved realized that the film would become the ultimate 1970s time-capsule, a classic that represents that decade’s youth. And it is probably that guileless attitude that makes the film still so fresh and viewable.