Behold, fans—the long awaited conclusion to your dark-hero trilogy. I hope you are more impressed than I was. 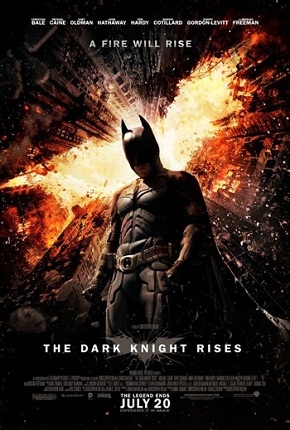 Maybe my expectations weren’t as high as the nearest fanboy or girl. Maybe I’m just kind of picky and want to be emotionally involved in a film, with developed characters and an interesting story arc. Maybe I’m just opening up myself to be flogged. But after all the fuss, hype (and a very unfortunate opening night), I just wasn’t too impressed with The Dark Knight Rises.

The Dark Knight Rises picks up in Gotham City eight years after the events of The Dark Knight, when D.A. Harvey Dent (turned Two-Face) was killed and turned into a martyr by the people, representing all things good. Blamed for the killing, Batman (aka Bruce Wayne, played by Christian Bale) became a bit of a martyr himself, dropping off the grid while his pal Commissioner Gordon (Gary Oldman) reluctantly allowed his partner in crime-fighting to take the fall. Now, years later, the streets have been cleaned up, and Bruce Wayne is a recluse, hobbling around his mansion with a cane.

Enter new bad guy Bane (Tom Hardy), who is introduced in a thrilling opening sequence involving the hijacking of a plane of prisoners (wow!). Bane, who is built like a brick and wears a sort of breathing-apparatus mask strapped to his face, is the type of guy who can get himself out of any situation, if only by sheer brute force. Rumor has it, he was born in and escaped a pit-prison in a nameless ‘Stan country, and boy is he pissed at the world. Bane is set on destroying the peace and order in Gotham by turning the financial and social structure on its head. There is only one man who can stop him, right?

The Dark Knight Rises introduces a bevy of characters, including a young cop named John Blake (Joseph Gordon-Levitt), who seems to have figured out easily (where no one else could guess) that Bruce Wayne is the man behind the wings. There is also Miranda Tate (Marion Cotillard), a shrewd businesswoman that quickly turns into a bizarrely chemistry-free love interest for Wayne (why? just because they are both ridiculously good looking?). The best addition, however, is Anne Hathaway’s Selina Kyle, a 99% cat burglar (Catwoman!) who seems to be a thief mainly for the sport of messing with the 1%. She has loads of fun with the role, and unsurprisingly looks awesome in a catsuit (yes, please replay the scene where Catwoman gets on the Bat Bike, thankyouverymuch).

The film is bloated to nearly three hours in length, trying to do too much—overly weighed down by self-importance to itself and to its fans. The pacing is clunky, with so many people and subplots that important characters (like Bruce Wayne, even!) disappear for chunks of time, or are absent from the storyline for months (where were they? eating bonbons in an opium den?). There are convenient suspensions of disbelief, like Wayne showing up in Gotham in the nick of time, despite it being made very clear that the Manhattan-like city was impenetrable. There is poor Michael Caine, as Wayne’s man-servant/father-figure, who only shows up to weep and blubber repeatedly. Then there is the addition of Matthew Modine as Deputy Commissioner Foley… and he is terrible terrible terrible, bringing his scenes down to a laughable C-movie level.

But what about Bane? Hero movies are usually only as good as their bad guys (see Heath Ledger as The Joker—who set the bar almost impossibly high). I really wanted to like Bane as a bad guy, but boy oh boy, there is something going on with his voice that is hugely distracting. Apparently Christopher Nolan had to re-dub Bane’s voice after no one could understand a word he was saying in the trailer. So now? His voice is disembodied and never sounds like it is coming from his face. But the entertaining thing about this is that his new voice sounds like a weirdly distorted and amplified version of Gandalf from Lord of the Rings.”Gotham, take control… take control of your city. Behold, the instrument of your liberation!”

So, behold, fans—the long awaited conclusion to your dark-hero trilogy. I know that in your rabidly loyal eyes that my review won’t matter one bit. I just hope you fans are more impressed than I was.