Jessica’s only hope is that broken phone… 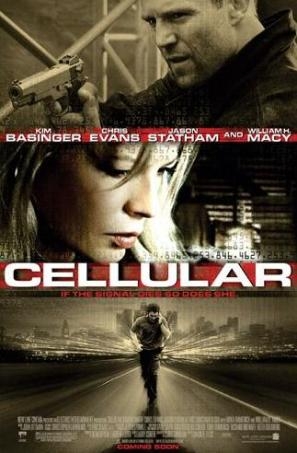 If 1980s Kim Basinger were kidnapped and locked in an attic with nothing but a broken phone to save her, she most certainly would have spent the duration of that movie skittering around the room and letting out startled screams. Like a confused chihuahua, 80s Kim would never have thought to rub those frayed wires together and she never would have gotten someone on the line to help her. Happily, circa 2004 Basinger is far more collected and somehow saves her delicate son and feeble-minded husband from corrupt cops in Cellular.

After Jessica Martin (Basinger) walks her son to the school bus on an ordinary morning, men break into her home, kill her housekeeper, and kidnap her. She has no idea what the motive might be, and cannot figure out what they want her to tell them. They lock her in an attic and threaten to kidnap her son if she doesn’t tell them where it is. Where what is?! She is convinced they have the wrong family.

Jessica’s only hope is that broken phone, and she manages to get Ryan (Chris Evans) on the line. Ryan is an affable if irresponsible young man, who initially believes he is receiving a prank call on his cell phone. “Yeah yeah, have fun with your kidnapping. You’re wasting my minutes,” he says. But he doesn’t hang up. He doesn’t show concern. He just keeps talking to Jessica in the most unrealistic and banal fashion. The tone of the first third of the movie is way off key and moves from mundane to jokey to serious too quickly for the viewer to become emotionally invested.

Luckily the film does recover. The tone and pace catch up to each other, and it becomes possible to engage in the story. We watch as Ryan speeds through town trying to save Jessica and her family at his own peril, and slowly the tension builds. His attempt to alert the police is unsuccessful, and that’s just as well, because the cops are in on it, and they do have the right family.

Ultimately Cellular becomes like an awful jigsaw puzzle you’re dying to see come together. Okay, “dying” might be an overstatement, but after seeing so many random connections, you do become invested in the payoff. Will an obnoxious lawyer ruin it all when cell signals get crossed? Will Ryan be able to keep Jessica’s family out of danger? Best of all, will Jessica step up as the smartest and most capable member of her family and totally save the day? The answer to that last question is totally worth waiting for as Kim Basinger proves that it’s possible to teach an old chihuahua new tricks.