Shadow of the Vampire

It’s a real shame that Shadow of the Vampire is a disappointing bore, since, after all, Willem Dafoe is a total hoot as Max Schreck, the spooky actor in the classic F.W. Murnau film Nosferatu.
By Lindaon October 12, 2013
0 Comments
Our Rating 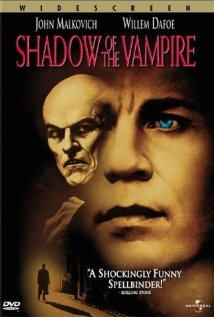 It really is a great idea, playing up the idea that Shreck was actually a real vampire, and Murnau was the only one who knew. To the rest of the crew, Shreck was just a freaky actor who always stayed in character and costume. “No makeup!” Murnau (John Malkovich) shrieks when one of the assistants tries to powder Shreck’s forehead in preparation for a scene.

Why doesn’t Shadow of a Vampire work? Hmmm. The sets were fine. The idea of the story was clever. But for a film based on the making of one of the scariest films ever made, Shadow is surprisingly bloodless. There is absolutely no soul to the film. John Malkovich has almost become a parody of himself. He is the only “German” in the film without a trace of a German accent (at least Cary Elwes, as the photographer, with his exaggerated pronunciations of “zis” and “zat”, made a half-assed attempt). The only crew member that sounded German was, funny enough, German cult actor Udo Kier, playing the film’s producer.

Who were these people? Why should we care? Why is the whole cast and crew taking drugs, and it is never acknowledged, but always emphasized? The only thing that kept me interested was Willem Dafoe’s over-the-top performance as the real-life Nosferatu. Shortly after his character was introduced, I started secretly hoping that Shreck would immediately start picking off the main characters one by one. At least then the film might have had a little bite. So to speak.