The War of the Roses

If nothing else, they are a passionate couple—Oliver with his undying love, and Barbara with her pure, unbridled hatred.
By Jenniferon October 12, 2013
0 Comments
Our Rating 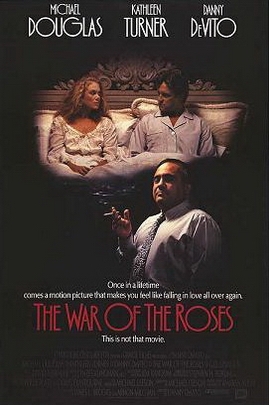 Few onscreen couples can compare to Kathleen Turner and Michael Douglas. They have such perfect chemistry that it’s possible to tolerate the sometimes silly, over-the-top situations in their movies for the sake of seeing them together. No matter how absurd things get, they never lose their credibility. I always imagine The War of the Roses as the natural conclusion to the Turner/Douglas trilogy that began with Romancing the Stone. If Jack Colton and Joan Wilder did get married at the end of Jewel of the Nile, I can see them winding up just like the Roses.

In all three movies, the dynamic is the same. Michael is the leader, the mover and the shaker, and Kathleen seems to take a backseat to him. She watches everything unfold from the sidelines, then quietly steps forward with the better mousetrap. Together they work like a well-oiled machine, but you can see that they might start to annoy each other over time.

Oliver and Barbara Rose fall madly in love on the day they meet, but after he builds the perfect career, she creates the perfect home, and their two children (Sean Astin and Heather Fairfield) head off to college, there’s not much left between them. Barbara starts her own catering business in an attempt to gain some independence, but she’s still unhappy. By the time she admits that she wants a divorce, she’d just as soon see Oliver dead. Sadly, her decision coincides with Oliver’s realization that he loves her more than ever. And so the war begins.

Barbara may want to be free of Oliver, but she refuses to give up their house. Seeing that this is his only hold on her, Oliver turns to his lawyer, Gavin (Danny DeVito), for help. They uncover a case where a divorced husband and wife continued to share the same house, and Oliver insists that he and Barbara do the same. The results, unsurprisingly, are disastrous.

At this point the gloves come off, much to the horror of the Roses’ children and housekeeper (endearingly played by Marianne Sagebrecht from Rosalie Goes Shopping). Nothing is sacred: pets, cherished mementos, cars, and business connections are all destroyed, and though it sounds terrible, it’s all very, very entertaining. It is dark comedy at its best.

After Oliver pisses on the fish that Barbara is about to serve her clients, things pretty much pass the point of no return. The Roses are doomed, and you can’t help feeling for them right up to the very end. If nothing else, they are a passionate couple—Oliver with his undying love, and Barbara with her pure, unbridled hatred. The movie is funny, shocking, and moving all at once.

To compensate for this rather grim portrait of marriage, the story is framed as a parable told to Gavin’s clients as they consider divorce. The Roses have made him realize that love, once it’s been found, must be fostered. Winding up like Oliver and Barbara is simply not an option.

You see, The War of the Roses really is a romance after all.