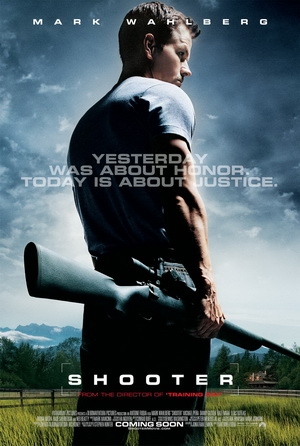 Complete the following comparison:
Eddie Murphy’s Norbit is to Dreamgirls
As Mark Wahlberg’s ________ is to The Departed

Yes, Shooter is right up there with Norbit as a shockingly bad film that almost single-handedly sends its star right back to square one. The only difference is that Mark Wahlberg walked the red carpet at the Oscars with dignity intact, because, lucky for him, this turkey hadn’t been released yet (whereas Eddie Murphy may have famously lost the Supporting Actor Oscar because the offensive poop that was Norbit was in about 10,000 theaters when the Academy was voting).

But I’ll forgive Mark for this one. After all, I kind of adore his furrowed brow intensity (see Four Brothers, Invincible) and his tough guy posturing. Apparently Shooter has been languishing in production hell, going through rewrites after rewrite, based on a seemingly made-for-the-movies conspiracy shoot ’em up thriller by Stephen Hunter, Point of Impact. But holy crap, if this is the best Hollywood can come up with, after so many people have made an effort, well, we’re in trouble.

Wahlberg plays a military sniper named Bob Lee Swagger, the best of the bunch. Bob Lee and his spotting partner get left behind in Ethiopia during an off-the-record job. His partner gets killed in the action, and we can only assume Swagger made it to safety due to his Rambo-like skills. But the mess leaves Bob Lee embittered, so he quits and literally heads for the hills, living off the fat of the land in a woodsy cabin, and growing a really skanky ponytail.

That’s how Danny Glover (who speaks like he has cotton in his cheeks) and his posse of shady government men find Swagger. You see, there’s word on the street, Danny says, that there is going to be an assassination attempt on the President in the upcoming week, in one of three cities… but they don’t know where. Could Swagger help out his country and the flag by checking out the locations, and see where a sniper like himself would try to take a shot? Well, if you put it that way…. But we all know those shady guys are up to no good, you know with Elias Koteas always sneering and chewing on a toothpick and all. So when it comes down to the moment of the assassination attempt, another important political figure is shot, and Swagger himself gets framed as the shooter. Run, Swagger, run!

People shoot at each other, shit blows up, people are not who they seem, and the conspiracy plot doesn’t really make enough sense to be even remotely interesting. But somewhere in the middle of the movie, Shooter has a weird moment of brilliance, as though a scene from a completely different movie was spliced in, just to throw us off. Credit for this goes entirely to actor Levon Helm, who I haven’t seen since he played Loretta’s dad in Coal Miner’s Daughter. He plays a goofy old guy in a Tennessee cabin who knows a heck of a lot about guns, wears thick glasses, and reads books on an overhead projector. His character takes great delight in talking about guns, as though he is talking about his new favorite candy flavor. I cackled out loud during this scene at its complete random quirkiness. THIS is the movie that I’d love to see. As it is, the rest of Shooter is simply crap.