Let me begin by saying this: I think the filmmakers made a mistake casting Jim Parsons as the voice of Oh, the (unintentionally annoying) character at the center of this somewhat bland animated adventure about finding one’s place in the world.
By Lindaon July 12, 2016
0 Comments
Our Rating 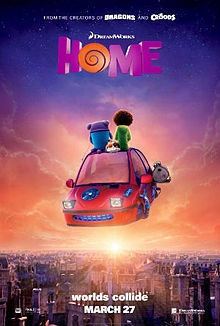 For starters, his voice is so distinct that it’s hard to separate the character from the actor. More problematic, though, is the fact that Oh feels like the cartoon-blob incarnation of Parsons’ well-known Big Bang Theory alter-ego, Sheldon Cooper. Like Sheldon, Oh can be grating, is clueless about human emotions and relationships, and (not surprisingly) has the exact same style of line delivery.

In the film, Oh is a well-meaning but bumbling – and then exiled – member of a gelatinous-esque alien race known as the Boov, who are sort of like far-less-cute versions of Despicable Me’s minions. After fleeing their intergalactic nemeses, the Gorg, the Boov invade Earth, relocate all humans to Australia and set about establishing a new civilization as they hide out. Oh, meanwhile, finds a new friend in a girl named Tip (voiced by Rhianna), whose mother (voiced by Jennifer Lopez) was swept away during the Boov’s Earthling roundup. Together, they set out on an intercontinental trek to reunite mom and daughter, all the while attempting to evade notice by Oh’s none-too-pleased brethren, who discover he’s inadvertently notified the Gorg of their new coordinates.

I’ll wait while you reread that all to get the story straight.

Thing is, though some of it is fun, there’s nothing particularly unique or exciting about director Tim Johnson’s big-screen adaptation of the popular children’s book The True Meaning of Smekday. The proceedings all feel kind of familiar – two dissimilar outsiders become friends and embark on a perilous trek that brings them closer – and the soundtrack is inexplicably, almost distractingly packed with Rhianna tunes, which feel weirdly out of place in a kids’ flick (as though dropped in solely because there was some contractual obligation to have them included). The syntax used by Oh is also incredibly irritating: he can spit out lines like “this is not a sustainable friendship model” with ease one second, and the next be stumbling over something as comparatively simple as “me’s is feels afraid.”

Voice-cast-wise, the results are meh. As mentioned, Parsons simply does a variation his usual schtick, and Rhianna is somewhat wooden. I didn’t actually realize her character was supposed to be about 12 years old until she casually mentions something about being in seventh grade – I totally thought she was supposed to be at least 16. Lopez is fine, but only Steve Martin, as Boov leader Captain Smek, adds some oomph and color to his performance.

Don’t get me wrong, the film is decidedly adequate, just not exceptional or especially memorable. I did enjoy the antics of Tip’s cat, Pig, and I’ll admit I did get a teensy bit choked up at least once. But, overall, Home is a family film that doesn’t quite meet the bar set by some of its recent predecessors.

The Party Edition! Blu-ray is squarely aimed at kiddies, who should find some fun extras to enjoy, including “Oh’s Party Place” with a jukebox of music bits from the film, including a short called “Oh’s Shake Your Boov Thing” showing the Boov dancing to the humanoids’ music. There are also a bunch of “Short Boovies” adding some more Boov-rific background to that alien species. There are deleted scenes, and a pile of videos and such from other DreamWorks films like Kung Fu Panda and Shrek. But if I was a kid watching this, I’d push aside all this music and dancing stuff and go straight for the “Be An Artist!” extras that offer lessons from Story Artist Andy Erekson on how to draw various characters from the film, like Tip and Oh.