SIFF 2009: Schedule out this week… Release the hounds!

Starting May 7th (for SIFF members; a day later for the general public), you may as well trumpet, “Release the hounds!” as SIFF tickets officially go on sale.

The 35th annual Seattle International Film Festival this year boasts 392 films. Among that bafflingly large number are 199 features, 54 documentaries, 124 short films, 11 archival presentations. And, heck, there is a core group of you that are always out there to watch 100+ full-length films (you know who you are!).

As mentioned before, two big guests are Spike Lee (who is honored with a special tribute) and Francis Ford Coppola (who will be presenting his latest film, Tetro). There will also be special presentations of the new Chorus Line documentary Every Little Step, a fun archival screening of the 60s road-romp The Great Race (in honor of the 100th anniversary of Seattle’s Alaska-Yukon-Pacific Centennial), and the annual Gay-la Extravaganza will present Patrick 1.5 (which we’ve already heard excellent buzz about from our very own Eric who saw the film in Toronto). Midnight Adrenaline screenings once again “focus on dead things and bleeding things” (according to Programmer Beth Barrett), the ever-sold-out Secret Festival is back, there is a cool new Digital Media Lab with free classes, and the fest returns to the Eastside (Kirkland Performing Center) AND West Seattle (The Admiral). Fun for all is sure to be had! (Can you tell I get excited about these things?) 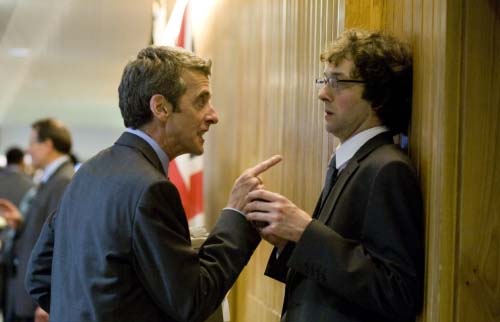 Opening Night will return to the gorgeous Paramount Theater, and will feature the crisp, biting, and very funny political farce In the Loop (that boasts a great British & American ensemble cast including James Gandolfini, Tom Hollander, Gina McKee, and Peter Capaldi). The post-film soiree will literally spill out into the streets as the fest takes over closed-off 9th Avenue right next to the theater (cross your fingers for a dry night!). And, yes, this year you WILL get two drink tickets with your Opening Night pass. Closing Night should be a big hit: A few years ago the French James-Bond-esque camp-fest OSS 117: Cairo, Nest of Spies took the Golden Space Needle audience award. The SIFF audience will surely eat up its sequel, the Closing Night feature OSS 117: Lost in Rio. I got to see the trailer in French without subtitles, and it still made me laugh.

So get your pencils ready and start making your lists! The full, detailed SIFF schedule will be released later this week, and you’ll be able to get all the info at www.siff.net.