SIFF 2009: A sweet Swedish film and a mysterious puppet

You may have noticed my SIFF’n slowing down. I apologize in advance because it will continue this way through the next week, as my regular job is sucking all of my time. But still, I persevere, and will be catching flicks when I can (and hopefully pile them on in the last week).

That said, after a couple-days break from SIFF’n, I caught the Gay-La presentation of Patrik Age 1.5 (Patrik 1,5) (6/8) from Sweden. I had heard good buzz in advance about this film (specifically from Eric who saw it at TIFF), and luckily the word of mouth proved to be right on (because as well all know, when a gay movie is wretched, it can be sooooo wretched). 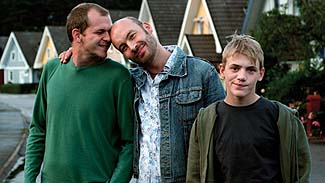 Goran (Gustaf Skarsgård) and Sven (Torkel Petersson) are a gay couple that have moved into a suburban neighborhood right out of Revolutionary Road. The houses are cute and matching, packs of kids are playing on the streets, the residents hold neighborhood barbecues, and people are in each other’s business. Goran and Sven are excited soon-to-be parents, and are thrilled to find out that their new baby named Patrik (aged 1.5) will be delivered soon. Except a 15-year-old teenaged thug named Patrik (Thomas Ljungman) shows up instead. “Ooops! Our bad! There was an inconvenient typo in the letter!” they are told by social services. Sven thinks he is going to be knifed in his sleep, Goran is frantically trying to figure out how long until the kid can find another home, and the homophobic kid is mortified at the situation.

If Patrik Age 1.5 were an American film, madcap hilarity would ensue. But this film is actually more subtle, as Goran and Patrik get to know and trust each other (while Sven completely flips out). If I had any complaints, Patrik hardly seems like the bad kid of his reputation, it is not such a leap to see them all slowly accepting each other. All in all, I liked the film a lot… It was sweet, funny, and heartwarming. And the evening was made doubly so as a man was proposed to by his boyfriend (to thundering applause and cheers) in front of the whole audience before the movie unspooled.

Funny post-movie story: As I was walking down Pine after the show, I noticed these two guys that I had seen at the screening (they were a hard to miss couple, with their matching blue and white striped polo shirts and khaki shorts). They were crouched by one of the sidewalk planter areas and giggling as I walked by. “Look!” they said to me, pointing at something sitting right there in the bark, “Isn’t that weird? It’s like it was just left there on purpose!” What they were pointing to is a perfect condition hand-puppet of an old man with a black robe… maybe a Supreme Court justice? I acknowledged that it was indeed weird, and was chuckling to myself as I continued walking to my bus. So half an hour later, I was on my bus, and it swung by one of the last downtown stops to pick up some people… and who gets on the bus? The two guys, and one of them is carrying the puppet! You just know there was a divine reason for them to find it, I just wonder what it is… 🙂 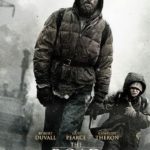