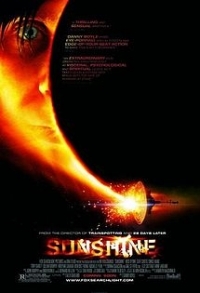 Everyone knows that solar rays can be damaging, but the extent of the damage varies according to proximity, as the crew of Icarus II begins to realize during a deep-space mission to “reignite” the sun, which is slowly dying and threatening life on Earth as a result.

But as the Icarus II gets closer to the sun, strange things start happening. Searle develops a seriously unhealthy fascination with the almost hypnotic effect of staring directly at the sun through one of the ship’s observation windows. Blindingly bright, the exposure is, we’re told by the voice of Icarus (Chipo Chung), only at 2% of maximum strength. When she diffuses the light to 3% intensity at Searle’s request, the light is so overwhelmingly strong that it knocks him on his ass. Unfortunately, those rays also begin working their mojo and, soon, it becomes obvious that they result in some mild brain scrambling alongside a seriously nasty sunburn.

When the Icarus II unexpectedly comes upon Icarus I drifting in space millions of miles from home, the proceedings go from wonderfully creepy to kind of scary to completely over-the-top (in a bad way). The question for the crew becomes: do we risk our resources to travel off course to see if anybody on the Icarus I is still alive, or do we ignore the possibility of survivors to continue on our path for the sake of all humanity? Suffice it to say that one bad decision quickly follows another, and soon the entire crew of Icarus II is fighting to stay alive.

For me, the film’s biggest draw was the cast—an eclectic and interesting assembly of great actors from across the globe. Murphy, Yeoh and Curtis, especially. Who wouldn’t want to see them play together in a sci-fi movie? And, for the first hour or so, the intergalactic odyssey is really effective, if occasionally overly kinetic. Tension builds slowly and, as an audience, you just know something’s not right. It’s creepy and freaky and spooky and works really, really well as a psychological thriller as power struggles emerge, interpersonal struggles erupt and you wonder if Capa and Cassie are hooking up. The performances from the cast are universally strong, and the environment of their vessel is appropriately, subtly menacing.

Things derail completely, though, around the halfway mark, when the filmmakers fail to trust the brains of their story and, instead, turn it into an insipid monster movie. I think I let out an audible groan when it became clear that, despite my hopes, Sunshine was very obviously turning into a lame, needlessly gory horror movie. Why? WHY? It was doing so well and had me completely engaged! Why throw a wrench into the works for the final half? *sigh* Instead of mental gymnastics, the characters are running around like lunatics and the mission to the sun is sidelined by chase sequences and increasingly unpleasant ways to die. Whyyyyy???

Unfortunately, that changing of the film’s tide lost it a good four slices on this review. What could have been great wound up silly and, like the movie itself, that which could have been full-pie worthy is left standing at the halfway mark.