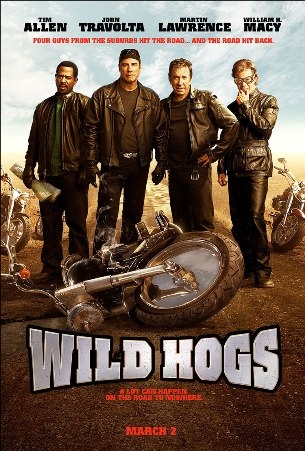 Strangely enough, though, I didn’t find it nearly as painful or tragically mangled as either of its aforementioned predecessors on my screening schedule. Comparatively speaking, it wasn’t terrible. Oh, it’s fully lame and filled with the kind of humor that you can only produce when you’re writing by committee (“let’s have a guy slam face first into a road sign! it’s genius!”), but I did manage to laugh a few times (with the film, not at it). Go figure.

Here’s all you really need to know about the cookie-cutter plot: four middle-aged friends – suburban dentist Doug (Tim Allen), hen-pecked plumber Bobby (Martin Lawrence), computer geek Dudley (William H. Macy) and suddenly broke trophy-husband Woody (John Travolta) – agree that their lives have become safe and boring, so they decide to pack up their Harleys and go road trippin’. Hilarity tries desperately to ensue as the quartet find themselves embroiled in one escapist hijink after another…not the least of which is inadvertently winding up on the business end of a feud with a snarly, hardcore biker (Ray Liotta) and his gang of swarthy minions.

That’s kind of it. There’s plenty of male bonding and “OMG, we’re not gay!” jokes along the way, as the boys discover the open road and the limitations of their advancing age and collective girth. Aside from being treated to countless close-ups of Travolta’s über-faux toupee (you’re fooling no one, John) and freshly tweaked face, audience members also enjoy a good, long look at Allen’s bizarre nipples (are they inverted???) and William H. Macy’s naked posterior (awww, cute!) when the lads toss their kits for the requisite (and, thanksverymuch, unnecessary) skinny-dipping-gone-awry scene. Yet through all of this, the proceedings never really rise above sitcom humor.

If you read the ‘Pie, you know I love Martin Lawrence, so it’s no surprise that I enjoyed him here. In fact, he made me laugh the most. William H. Macy was nebbish and endearing. But the other two? Meh. Even Liotta’s greasy Jack was uninteresting and tediously clichéd.

By the way, you wouldn’t know it from the trailers, but there are, indeed, women in the movie. Too bad they’re used as set dressing. Worse still, one of them (Marisa Tomei) is an Oscar winner. She manages a limp romantic subplot with Macy, but poor Jill Hennessy is stuck with a handful of lines and a thankless role as Allen’s better half. The only woman who gets an ounce of screen spark is Tichina Arnold as Karen, Bobby’s spitfire of a wife…but that’s likely due to Arnold herself and not the generous filmmakers.

People often say that life is about the journey and not the destination. Unfortunately, in the case of Wild Hogs, neither one is particularly fulfilling. 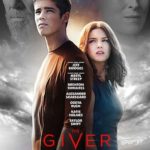 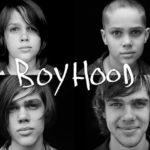