What’s more relatable than a girl who receives a wedding invitation and proceeds to check both “accepts with pleasure” and “declines with regret” on the RSVP card, lights it slightly on fire, then mails it anyway?
By Jenniferon July 22, 2017
0 Comments
Our Rating 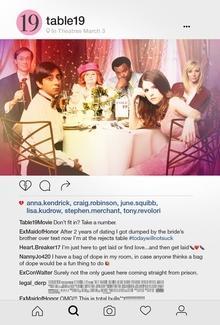 Somehow I decided that Table 19 was going to be a broad, slapstick comedy along the lines of Office Christmas Party. This assumption had no basis in reality, but it didn’t leave me especially excited for the movie. When I finally got around to watching it, I was pleasantly surprised at its wry, irreverent tone. What’s more relatable than a girl who receives a wedding invitation and proceeds to check both “accepts with pleasure” and “declines with regret” on the RSVP card, lights it slightly on fire, then mails it anyway?

Turns out Eloise McGarry (Anna Kendrick) has plenty of reasons to dread this particular wedding. Being dumped by the bride’s brother ranks at the very top of the list, with being demoted from maid of honor to guest at the “Randoms” table a close second. She finds herself at Table 19, the dumping ground for everyone who should have known to politely decline, but showed up anyway. Other winners in this seating lottery include the bride’s first nanny (June Squibb), family business acquaintances Bina and Jerry Kepp (Lisa Kudrow and Craig Robinson), the awkward son of an acquaintance (Tony Revolori), and a cousin (Stephen Merchant) who went to prison for embezzling from the family business. It’s an odd and incongruous bunch, but it might turn out to be the best seat in the house.

As the reception progresses, we learn that Eloise is far more than a jilted ex-girlfriend who doesn’t know when to let go of a complete and utter tool (Wyatt Russell). When her secret is revealed, the guests at Table 19 immediately offer their friendship and support, and, quite suddenly, the rejects begin to seem like actual three-dimensional people. From that point on, the movie is a little like The Breakfast Club (which seems only fitting since most wedding receptions are a little like detention). Props too for a wedding singer who specializes in 80s pop hits.

The notion that there’s more to a person than meets the eye is a simple one, but Table 19 is a triumphant reminder that being real is harder than it looks. The characters consistently undercut their own happiness, but then, don’t we all? Kudrow’s subtle, complex portrayal of Bina is a perfect example of all that’s right with this movie. She longs for passion in her marriage, even as her behavior perpetuates the rut she’s in. Others are paralyzed by their fear of failure or inadequacy, but everyone finds salvation in honesty.

Blu-ray and DVD bonus features include deleted scenes, the featurettes “Table of Rejects”, “Head of the Table”, and “Table For Six”, and a photo gallery. 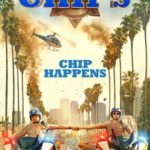 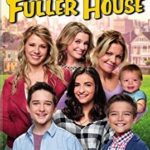