There is nothing more dangerous than a group of overheated, bored women…
By Lindaon January 27, 2018
0 Comments
Our Rating 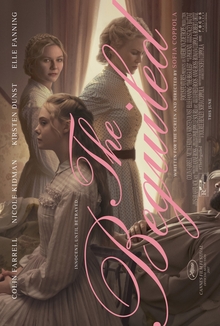 Spanish moss. Oak-lined plantation roads. Shimmering lazy heat. A white columned mansion. Genteel young Southern ladies in white dresses practicing their French verb conjugation. It seems idyllic, except it is 1864. The two teachers and their handful of remaining young wards can hear the distant booming of cannons and see columns of smoke off over the trees. The war is almost over and the South is losing. But Southern women have their manners, and will continue on with dignity and more than a bit of denial, even if it means doing manual work that would have been left to the slaves (who are gone).

Into their isolated bubble comes a wounded Yankee soldier (Colin Farrell) whom one of the girls discovered while out picking mushrooms. Much debate and fuss ensues. This is something different. He’s an enemy. He could die of his wounds. Most importantly he’s a MAN. Miss Martha (Nicole Kidman) decides firmly that they should tend to the unconscious man’s wounds, keep him overnight, and then turn him in to the Confederate army. But even for a stalwart character like herself, sponge bathing the unconscious soldier’s wounds almost spins her into a surprising swoon of lust.

The Beguiled is an intimate and immediate character piece. Almost the entire claustrophobic, humid story takes place in the confines of the house, the yard, the Yankee’s room. The girls and women, knowing they should leave this Colonel John McBurney alone to rest and heal can’t seem to keep away. And he works the crowd, playing up to each of them, from the spinsterish, desperately lonely Edwina (Kirsten Dunst) to the lusty teen Alicia (Elle Fanning), to even the younger girls who vie to be his favorite.

McBurney’s motives? A little unclear, except what man wouldn’t want to be surrounded by a bevy of women while hiding out until the end of the war? But the lusty Southern eroticism and female hysteria will ultimately hit a breaking point, and that is when The Beguiled takes a sudden turn to gothic horror. “Bring me the anatomy book…” will easily be one of my favorite movie lines of the year.

For all of its lush, gorgeous cinematography and costuming, and its equally beautiful cast, The Beguiled doesn’t let you in very deep. There is very little context to the characters, except for being dropped into the here-and-now moment of their isolated lives. We learn as much about the girls and women as John does, and likewise, we only know about John as far as what he tells his hosts. It makes for an efficient, compact tale that offers much in mood and style, but not much deeper than that.