While this third big-screen misadventure for the world’s most lovable supervillain isn’t exactly a highlight in the franchise, it’s an improvement on the middling Minions. 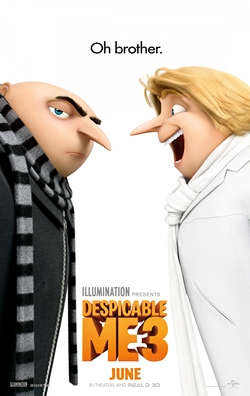 This time around, Gru (voiced by Steve Carell) finds himself on the outs with the Anti-Villain League (AVL) and its hard-nosed new boss (voiced by Jenny Slate), who fires him after he fails to thwart former-bad-boy-child-star-turned-disgruntled-grownup-villain Balthazar Bratt (voiced by Trey Parker). Bratt, perpetually stuck in the 1980s, clinging to the fame he had a child and vowing revenge on the world he believes let him down, then engages in a cat-and-mouse game with Gru over a massive pink diamond: Bratt wants the diamond for nefarious purposes, while Gru believes recovering it will help him restore his tarnished image at the AVL.

While all this is unfolding, Gru also discovers he has a long-lost twin brother named Dru (also voiced by Carell), who’s got flowing blonde locks and is desperate to recruit Gru back into the “family business”: villainy! Seeing an opportunity to harness Dru’s enthusiasm for unbeknownst (to Dru) good instead of evil, Gru agrees, the pair teams up to tackle Bratt and hijinks ensue.

And while all that is unfolding, there are assorted subplots cluttering the narrative, among them: Lucy (voiced by Kristen Wiig) attempting to find her footing as a mother figure to Gru’s girls; little Agnes (voiced by Nev Scharrel) trying to find a unicorn; and the disillusioned Minions, fed up with Gru’s conversion to hero, packing up and taking off… and promptly landing in jail thanks to a momentary movie-crossover moment that will delight fans of Illumination’s other animated offerings. (To say more would be to spoil the fun.)

There’s a LOT going on in Despicable Me 3, and while that does help keep the narrative bouncing along, it also makes it bounce around to a degree that it feels a bit cluttered and disjointed. Unlike, say, The Incredibles – a movie that deftly merges family dynamics with the demands of life as a superhero – DM3 never quite strikes a balance that works. Bratt is more annoying than he is threatening (his weapon of choice is self-regenerating bubble gum), and he repeatedly takes a backseat to most of the other characters, randomly popping in and out of the story… which sort of takes the wind out of the sails of any showdowns he has with Gru and/or Dru.

The female characters all get sidelined in this outing, as well. Lucy, Margo, Edith and Agnes are relegated to tiny supporting roles without much purpose, really, and probably could have sat this one out entirely. Even the Minions are given more to do, and one in particular – Mel – weirdly takes center stage as the lead Minion… even though he’s never figured prominently in any of the earlier films.

There’s no question that kids will still dig DM3, and that its colorful onscreen antics will keep them more than entertained. But given the film’s final, sequel-setup scene, one hopes that the inevitable DM4 will tighten up its screenplay, even out its characters’ playing field and aim a little higher.