The Chronicles of Narnia: The Voyage of the Dawn Treader

While not quite as wonderful as The Lion, The Witch and The Wardrobe, this entertaining third film in the Narnia franchise certainly improves greatly on the second.
By Vickieon April 21, 2013
0 Comments
Our Rating 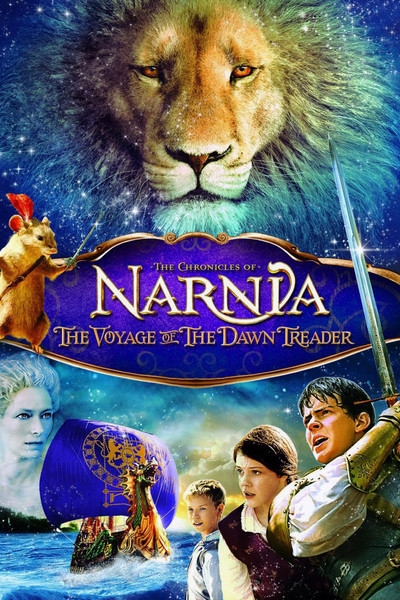 This time around, youngest Pevensie siblings Lucy (Georgie Healey) and Edmund (Skandar Keynes) find themselves transported from WWII-era London to Narnia, with their obnoxious cousin, Eustace (Will Poulter), in tow. They splash down in the sea and are promptly plucked from their plight by Prince Caspian (Ben Barnes, who’s thankfully dropped the unconvincing, fake Spanish accent and reverted to his own) and the crew of the titular vessel. They’re also reunited with noble, sword-wielding mouse Reepicheep (now voiced by Shaun of the Dead’s Simon Pegg), who takes it upon himself to reform whiny, petulant Eustace.

The Pevensies, meanwhile, join Caspian on his current mission: to track down seven magical swords and place them at Aslan’s table so that the balance of good and evil can be restored to the (Narnian) world. As with any adventure, the group’s journey is fraught with peril, evil forces – this time in the form of an omnipresent green mist and a few chilling cameos from the White Witch (Tilda Swinton), valiant battles and a gaggle of Dufflepuds.

Unlike Prince Caspian, which favored action over whimsy and violence over heart, Dawn Treader makes a welcome return to magic and wonder. There are spells and celestial beings and a beautiful indoor snowfall, alongside friendship, love and laughter. Directed by Michael Apted, the film feels much lighter in as a result, making it much more family friendly than its cinematic predecessor.

The film does have its flaws – some sections feel a bit rushed and muddled in a bid to get the story to its next narrative marker, and some hardcore purists have already turned up their noses at the not-wholly faithful adaptation of C.S. Lewis’ novel – but, for me, they were minor. More problematic, in my opinion, was the needless 3D element. Nothing in Dawn Treader needed to be in 3D (and, in fact, none of it actually is), so the tacked-on effects aimed at boosting the box office take felt especially pointless.

Overall, I thought the film worked on the levels it hoped to attain. It made me smile and, not surprisingly, it made me cry.

I have an enormous soft spot in my heart for Aslan, and have since I was little girl. I had goosebumps each time he appeared onscreen here and, by the time the poignant theme of growing up and growing older and saying goodbye to childhood was introduced, there was an equally enormous lump in my throat.