Have we learned nothing from every movie ever made about encountering a mysterious life form in space? Namely, that the wisest course of action is always to just leave it alone, back away slowly and then flee as fast as humanly possible? 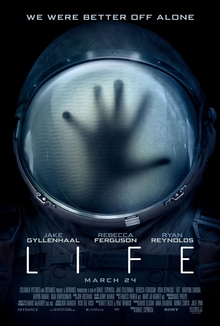 Anyone who’s ever seen one of those movies – or, for that matter, anyone who’s ever tried to kill a big spider, only to miss and have it seemingly vanish after it scurries behind or under a piece of furniture – will therefore no doubt be familiar with the underlying sense of panic and dread that runs through this fairly standard-issue sci-fi thriller from director Daniel Espinosa.

Jake Gyllenhaal stars as David, an American medical officer who’s part of a fittingly diverse team of a half-dozen scientists orbiting Earth aboard the International Space Station. Their mission commander is a Russian (Olga Dihovichnaya), their quarantine expert (Rebecca Ferguson) and biologist (Ariyon Bakare) are Brits, their strong and silent colleague is Japanese, and the resident comic relief is another Yank (Ryan Reynolds). Together, they’ve been on a multi-month mission to collect samples from Mars, and one such sample is a single-celled organism they call “Calvin.” Awwww, Calvin! He sounds precocious and fun!

But what our team of intergalactic investigators quickly discover – which everyone in the audience can telegraph right from the film’s first frame – is that their rapidly growing little friend is, in fact, a super-smart, super-ruthless killer space octopus-plant with an insatiable appetite for human blood. Fun times!

While it does boast some genuine suspense (where IS that alien?!) and some impressive effects (what IS that alien?!), Life isn’t really reinventing the wheel, here. It unfolds exactly as you would expect it to and exactly like every other film of its ilk before it, with Calvin gradually making mincemeat (sometimes literally) of the increasingly frantic crew. That’s not necessarily a bad thing: it’s a fun ride that often had the theater pin-drop silent with “meeeeeeeeeep!” anticipation, but it’s also a fairly paint-by-numbers story, and I’d just hoped for a cool twist or unexpected take on a genre film.

While all the human actors fine, the real star of the show is our CGI villain, Calvin. He (it?) starts out as an adorable little spore and gradually morphs into a seemingly indestructible border-collie-size killing machine. What was never clear to me, though: why not just stab it? Slice it with some kind of blade? That was probably the only tactic not employed by the dwindling ISS population of otherwise smart people.

Ultimately, as a springtime cinematic offering, especially in the dead zone of March big-screen releases, Life is a decent if predictable distraction.