The Man From Snowy River

Try not to hold your breath when you watch Jim’s horse take that leap of faith off the cliff edge.
By Lindaon December 27, 2014
0 Comments
Our Rating 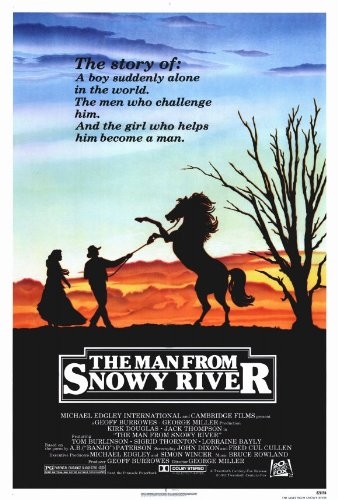 Oh, man, I loved The Man From Snowy River when it first came out in the 80s. I wasn’t really a horse girl, but I was obsessed with Australia. I even had the movie poster for Return to Snowy River on my wall, despite the fact that it was kind of a weak sequel and was initially (and confusingly) marketed as Return to Snowy River Part 2 (until people realized that title didn’t actually make any sense). When I rewatched The Man From Snowy River, it was perhaps not quite as glorious as I remembered it, but it is still a totally enjoyable family movie.

Tom Burlinson plays Jim Craig, a young man in late 1800s Australia. When Jim’s father dies in a freak accident, it is up to Jim to find some work in order to keep his father’s struggling farm. Jim’s natural talent with horses gets him a job on a ranch, where the other men treat his with suspicion and disrespect, and the boss’ daughter (Sigrid Thornton) looks at him with the googly eyes of a young woman suddenly presented with a clean, good-looking young man with impossibly tight pants for the Old West. When a local pack of wild horses (called brumbies), led by a mysterious stallion that lures even the most domestic horse to break free, threatens the boss’ ranch, young Jim steps up and becomes… a man! Yes, the man from Snowy River!

To add some Hollywood magic, none other than Kirk Douglas shows up in two roles, as the boss of the ranch, and as Jim’s father’s peg-legged mining buddy Spur. Douglas’ appearance in this film (in both cases) is almost over-the-top compared to the more sedate Australian actors, but it also gives the film a bit of a kick in the britches to make up for Burlinson’s rather sedate acting style. Go-to Australian star Jack Thompson also rides into the film to give it some star wattage in a few key scenes.

But the real stars of The Man From Snowy River are the horses. You might giggle at the outrageous shots of silhouetted horses against burning orange skies if scenes weren’t so darned gorgeous. And the chase sequence at the end of the film, where the ranch hands pursue the brumbies, is as exciting as any action film. But the scene that everyone remembers, of Jim riding his horse down an impossibly steep cliff in slow motion, will still make your jaw drop. Try not to hold your breath when you watch Jim’s horse take that leap of faith off the cliff edge. That moment is still one of the greatest and most memorable moments in any horse film or Western, and alone makes The Man from Snowy River worth a look.

Alas, the only extras are movie trailers. With all the online discussions about the who/what/and how of the cliff scene, I was hoping for some answers! Ah, well, the mystery of the movie’s magic remains!