While watching The Good Lie, I couldn’t help but be distracted by the nagging feeling that the film should be better than it is.
By Lindaon December 23, 2014
0 Comments
Our Rating 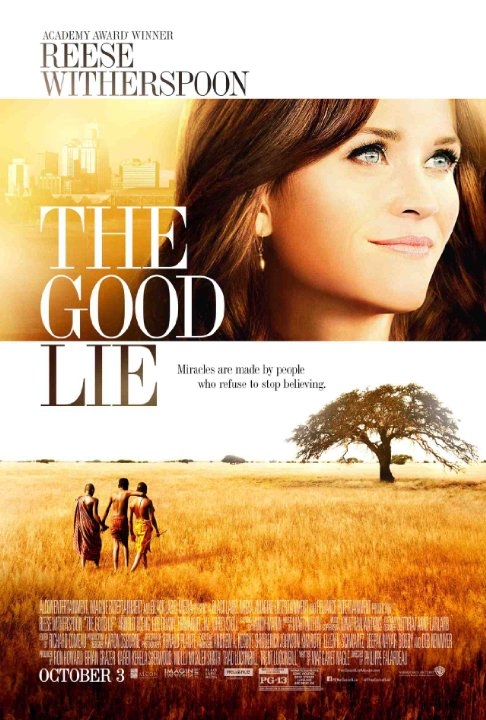 It is hard to dislike a movie that has such earnestness behind it; a movie with a story that deserves, no, needs to be told to Westerners. There are certain conflicts that are so epic yet so distant that Americans (especially) often choose to simply ignore them. The conflict in the Sudan, a bloody civil war that began in the 1980s, is one such event that was hard for foreigners halfway around the world to wrap their heads around. I think it wasn’t until the refugees (often called “The Lost Boys of Sudan”) began showing up a dozen years later, that the stories started to emerge.

The Good Lie may splash America’s sweetheart Reese Witherspoon on the poster, but the central characters are a group of kids that survive a brutal attack on their Sudanese village, only to trudge hundreds and hundreds of miles across savannah and desert to find refuge in a neighboring country. The first half of the film follows these kids, a makeshift family created by horrific circumstances, as they drop one by one, from thirst, disease, animals, or (perhaps the scariest) abduction by soldiers.

Jump ahead a dozen or so years, and these “children” have been living in a refugee camp in Kenya along with tens of thousands of others who now have no country. The three boys and girl who we followed in the first third of the film are now adults in their 20s, and after years of waiting, they are overjoyed to finally see their names on a list to emigrate to America. But their donated and threadbare Nike shirts and coveted trainers don’t prepare them for the reality of landing in Kansas City, as well as the jarring news that the “sister” Abital (Kuoth Wiel) will not be placed with her brothers. She will go to a family in Boston. Seeing this family getting ripped apart by red tape after surviving so much is heartbreaking.

Reese Witherspoon is actually in a supporting role, showing up as Carrie, a job counselor who is a bit out of her league working with fresh-off-the-plane refugees. Moments like locking the door, tasting Coca-Cola, and answering the phone are played for knowing laughs. But these moments are interspersed with the young men getting low-skill jobs, going to school, and trying to figure out how to keep their small family together in this new and unfamiliar country.

While watching The Good Lie, I couldn’t help but be distracted by the nagging feeling that the film should be better than it is. It kept making me think of this astonishingly beautiful, sad, and enraging book by Dave Eggers called What is the What, profiling one Lost Boy’s journey. By casting several actors who had lived through and survived the war as refugees and/or child soldiers, the filmmakers were obviously going for an authenticity of experience, and I have nothing against that. But it doesn’t necessarily make for a great movie. The standout in the cast, as the family’s default leader Mamere, is Arnold Oceng, an actor who was raised in the UK. He managed to squeeze some tears out of me where the others didn’t. I have to admit that I’d be telling a good lie if I said this was a great movie, but if it is a viewer’s initial introduction to the stories of the war in Sudan, it is good enough.