It’s too bad that a film can’t simply propel itself along on the eye-candy factor alone. Matt Damon, as an amnesiac perhaps-super-spy, and cutie-pie Franka Potente (Run Lola Run) as the German girl who gets hauled along as he runs from the bad guys, make an interesting and attractive couple. But boy-oh-boy, I had read that The Bourne Identity had all sorts of problems in production, mainly the screenplay and the ever-changing finale, and it sure shows.
By Lindaon December 9, 2016
0 Comments
Our Rating 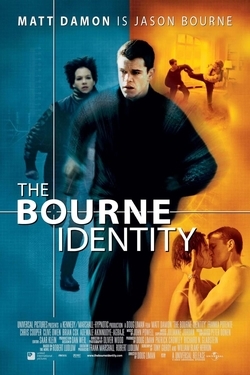 A man (Matt Damon) gets fished out of the stormy Mediterranean off the coast of France, with two bullets lodged in his back and his memory a blank slate. Oh yeah, when the fishermen pick the slugs out of him, they also find under his skin a little laser light (like the kind that my friends torture their cats with) that shines the number of a Swiss bank account on the wall. Hmmm. Something to go on, I suppose. Matt makes his way to Geneva, and finds a bank safe waiting for him, with 8 different passports, a whole bunch of money, and *gasp* a gun! He grabs all but the gun, and goes straight to the American Embassy for help.

Let me just say, if you go to an embassy, I don’t think it is a good idea to flip out, attack all the guards with your impressive martial arts skills, then escape out of an upper floor window. Sheesh, if they weren’t looking for you now, Matt, they sure are now! Matt, now figuring his name isn’t Matt but Jason Bourne, bribes a cute German girl (Franka Potente) to drive him all the way to Paris (where he has an address according to his U.S. passport).

OK, I’ll stop with the detailed plot recap now, because it is at this point that the movie slowly starts to unravel in coherence. The Bourne Identity has moved along at a nice little clip so far. People try to kill Jason right and left, and there’s even a surprisingly pleasing chase scene involving a Mini (one of those tiny cars) eluding the police through city streets. But when we start to see more of the bad guys (who seem to be shifty CIA government goons of some sort), as well as a tangent plot of a failed political assassination of some African dictator, you start to squint your eyes and go, “OK, now the assassins work for who? and are seemingly indestructible because… why? and why should we care about this dictator?”

Chris Cooper (Lone Star) flails about trying to add heft and weight to the truly awful lines he is fed as the head bad-guy CIA agent. Clive Owen appears in a few all-too-brief scenes as the baddest bad-ass assassin (Driving a BMW! Ha ha! Talk about advertising tie-in! I wanted more Clive! Make him James Bond!). And Julia Stiles fills some space in a bizarrely peripheral role as, I guess, the amazing 19-year-old field agent who runs the whole Paris branch, but can’t protect herself in a crunch.

It’s really too bad that The Bourne Identity falls apart by the end. There is a lot to recommend about it for the first half or so. Wintry Europe is a nice change for a thriller setting, and the two leads, as I said before, are an attractive pairing. But Bourne gets weighted down by under-written bad guys, gaping plot holes, and one climax too many (none of them really satisfying). There’s a pretty good movie in there somewhere, but this version ain’t it.