Undeniably gorgeous, Blade Runner 2049 suffers from the slow, deliberate pace of the original… but with less of a payoff. 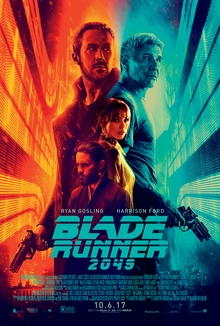 It is 30 years after the setting of Ridley Scott’s groundbreaking sci-fi classic Blade Runner. Ryan Gosling play the titular role as even more of a blank slate than Harrison Ford’s original officer/replicant assassin. Gosling, known only as K (the beginning of his own serial number) is of a new breed of replicants (manufactured humans) that improve upon the original decades-old design: these ones take orders and can never rebel. Replicants like K now work in the LAPD, hunting down the last few replicants of the original design (who have been known to rebel).

What K finds out one day in the desert after killing his latest mark (played with great solemnity by Guardians of the Galaxy‘s Dave Bautista) shakes him to the core: a date scratched on a tree and the buried body of a woman. The date was thirty years before, and the woman, who was a replicant, shockingly died in childbirth. This news, if it got out, would turn the dystopian world upside down. K’s knowledge (after reporting the info to his boss Robin Wright) now makes him one of the hunted. In turn, he wants to know more, seeking the long missing blade runner Rick Deckard (Harrison Ford), who disappeared 30 years earlier.

Like the original film, Blade Runner 2049 is an undeniably gorgeous film. Ridley Scott created a futuristic urban vision that influenced science fiction like few other films have. 2049 expands on the look: The ever-rainy Los Angeles is protected from the raging sea by a huge wall. Nearby San Diego has become a literal dump, whereas Las Vegas (one of the more visually stunning sequences) seems re-taken by burning orange sand and heat, with hedonistic statues and casinos frozen in time. Technology doesn’t seem to have advanced as much as you’d think: some of it looks even retro. My favorite scene involved K having a romantic interlude with his hologram girlfriend (Ana de Armas) while she projected herself over a human prostitute. Weird and fantastic looking.

At the same time, Blade Runner 2049 is frustrating. The plot depends on a great mystery from the past. The story throws you a huge bone early, letting you think for a solid two hours that you know the secret. (Filmmakers: When the audience thinks they have it figured out, you need to keep them guessing or they won’t be invested.) When the twist is finally revealed, there is not enough payoff to feel satisfying… It feels like more of a shrug, a check of the watch, and a mumbled, “Well, THAT was a long movie.”

2049 suffers from the slow, deliberate pace of the original. Let me just say here: I *admire* the original Blade Runner, but it ALWAYS puts me to sleep. Hardcore fans, I suppose, can be pleased that 2049 offers the same narcotic effect. However, unlike the original Blade Runner, the story seems less fresh, less original, and certainly less satisfying. The original can have geeks arguing over its meaning after the credits roll, because it has earned a sort of emotional, visceral investment. This movie sure has the look, but suffers from a plot that is somehow less involving, despite the huge implications of what it implies. Not only did it make me snoozy, but it didn’t particularly propel me to give it another try, like the classic original.

The special features on the Blu-ray release include a featurette about the creative team tasked with designing the look of the film; “Blade Runner 101,” a series of shorts about different aspects of the world of the film, like Wallace Corp., replicants, and Jois; and interviews with Director Denis Villenueve and the producers on casting the film. Most interesting are the Prologues, three short films (one anime, two live action) that fill out some pre-history of things that happened to key characters in the time between the two films.