Catch Me if You Can

Steven Spielberg has been so steadily prolific the last few years, with heavyweight acclaimed films like Saving Private Ryan and highly-anticipated and hyped movies like A.I. Artificial Intelligence and Minority Report that you can’t blame him for wanting to take a break and have some fun. Thus the lightweight and breezy Catch Me If You Can, which Spielberg could have directed with one hand behind his back. Unfortunately, it feels like he probably *did* direct it with one hand behind his back.
By Lindaon March 16, 2014
0 Comments
Our Rating 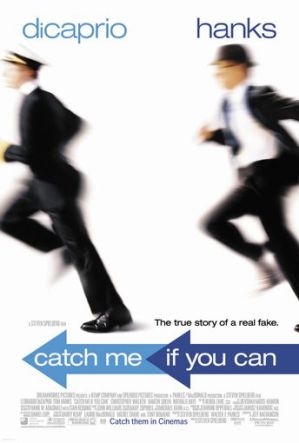 Catch Me tells the so-unbelievable-it-can-only-be-true story of Frank Abagnale, Jr. (the eternally youthful Leonardo DiCaprio) a con man of the highest caliber, who happened to pull his greatest scams when he was a mere teen in the 1960s. Between the ages 16 and 19, smooth-talking Frank impersonated an Pan Am airline pilot, a doctor, and a lawyer, and left a round-the-world paper trail of bad checks totaling in the millions. Pretty impressive stuff!

Hot on his tail over the years is federal agent Carl Hanratty (Tom Hanks, with a not-always-successful attempt at a Boston accent), whose repeatedly foiled attempts at catching Frank become an obsession to avenge his own humiliation.

Now, this all sounds great on paper, and it looked great in the snappy, clever, and frisky commercials for the film. But clocking in at an astonishingly indulgent 2 hours and 20 minutes (it could easily have trimmed to an hour and a half), it becomes a bloated bore.

How can this movie be boring? It is a chase film, fer cryin’ out loud. It involves wit, deceit, and a charming protagonist. It involves money, sex, and screwing the system to one’s great personal advantage. It has a jazzy 60s caper-film score by the usually navel-gazing John Williams. It has great period sets and costumes. It even has a groovy poster. But, somehow, it just… doesn’t… gel.

A big problem is that it masquerades as a comedy, but tries to beef up by throwing in scene after scene of soft-focus (Spielbergian) drama. You see, the point needs to be made over and over that Frank’s actions are a direct result of his parents’ divorce and his yearning to help his father (Christopher Walken!) who was never the success he wanted to be. While on the run, Frank reaches out and calls Hanratty at his office every Christmas Eve, because they are really two lonely souls that would have nothing without their strange bond of cat and mouse. And Frank makes a final attempt to go straight by marrying into a perfect Norman Rockwell family (with Martin Sheen as the patriarch)—a story arc so unsubtle with poignancy that you may as well sit in the audience with one of those laser pointers and give a lecture on the symbolic glory and healing power of the nuclear family as shown on screen.

I didn’t hate Catch Me If You Can as much as the last paragraph may hint, but I’ll admit I was disappointed. I wanted a fun escapist film on a rainy day. What I got was a truly interesting story that was bogged down in uninspired direction. I’m still not really sure why this movie failed. I can only shrug my shoulders in response—which, not surprisingly, is my same response when anyone asks me what I thought of the film itself. *Shrug*