Never underestimate an audience’s willingness to sit through a 3-hour movie rather than having to wait a year for a drawn-out conclusion.
By Lindaon March 3, 2015
0 Comments
Our Rating 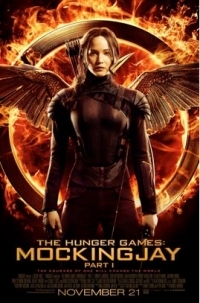 Don’t get me wrong… I’ve really liked the Hunger Games series so far. In fact, The Hunger Games and Catching Fire both made my Top Ten Movies of the year when they were released. But Mockingjay – Part 1 suffers (like The Hobbit movies) from stretching a story too thin to justify two stand-alone movies, just in order to give the studio more bucks for its bang.

Jennifer Lawrence returns as Katniss Everdeen, the fierce young fighter, survivor, and reluctant hero of a brutal reality-show game in which the post-apocalyptic Capitol throws children into a rigged arena for them to kill each other–the last one standing is the winner. The previous two installments showed what is at stake here, why all the survivors of the games are so messed up, and why a rebellion is now rippling like an explosion through all 12–no, make that 13 Districts. District 13, long thought to have been obliterated, is alive and well in underground silos, waiting for the perfect moment to start a revolution. Now that they’ve got a person (Katniss) that can be the Mockingjay, the symbol of the revolution, the real fight can begin.

Except Katniss isn’t who she appeared on TV. She is obviously suffering from PTSD, is emotionally scarred, and is distracted that her partner/friend/maybe-love-interest Peeta Mellark (Josh Hutcherson) has been captured by the Capitol, and might be brainwashed. Alarmingly, Peeta shows up on Capitol broadcasts earnestly pleading for peace, encouraged by leering President Snow (Donald Sutherland, having a grand time being a bad guy). In contrast, District 13’s President Coin (new addition to the series, Julianne Moore) and Capitol refugee (and former mastermind of the game itself) Plutarch Heavensbee (Philip Seymour Hoffman) are trying to mold the scarred and scattered Katniss into a warrior that will rouse the common people of the Districts, and be the inspirational symbol that she was on the Hunger Games.

Mockingjay – Part 1 takes its time, which is both good and bad. Suzanne Collins’ young adult book trilogy was so rich and interesting that I don’t think anyone minds spending cinematic time in Katniss Everdeen’s world. However, Mockingjay, the book, was not necessarily denser nor more complex in order to warrant dragging it out into two movies–it seems most fans can even agree on that. Sure, Liam Hemsworth’s Gale (Katniss’ best friend) is finally given some screen time, and allowed some character development. But for every cool-looking character added to the mix, like Natalie Dormer (with sci-fi hair and tattoos), who is entrusted to document the Mockingjay when she goes to the front line, there is a character, like the tall strong, bodyguard soldier that accompanies Katniss in more than a few scenes, who never really gets the opportunity to do, well, anything, except be an intriguing mystery guy with no development (despite plenty of time to do so).

Film studios should not underestimate that people will eagerly plunk down good money to watch a quality 3-hour movie. But asking audiences to watch that same story, with lots of filler, stretched into two films where you have to wait a year to see the final chapter… well, they are kind of pushing it in this case.  I’m sure I wasn’t the only one rearranging scenes, making some mental cuts, and tacking on the sure to be explosive second half. Here’s hoping the finale (Part 2 of 2) knocks it out of the ballpark. 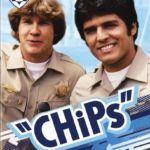 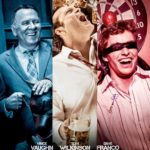